The World Health Organisation had issued a statement two weeks ago on 24 March 2020 noting ‘a very large acceleration of cases’ in the US and predicted that it would be the epicentre of COVID-19.

The worst hit city of New York recorded 779 new deaths from the virus in the past 24 hours, its highest single-day toll, though the state’s number of hospitalized patients is down. Governor Andrew M. Cuomo acknowledged progress but cautioned, “It’s not a time to get complacent.” 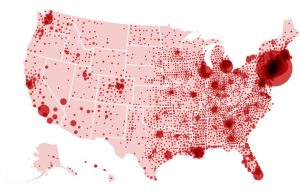 The nation’s top infectious-disease official, Anthony S. Fauci, warns that “now is not the time to pull back at all” on social distancing; rather, “it’s the time to intensify.”  A CNN poll, however, found that almost half of American workers are still regularly leaving home for work.

Close to 200,000 Samoans live in the United States, who have this week acknowledged that it will reach its peak use of resources such as hospitals and ventilators – on or arond Easter Saturday.

California’s Governor Gavin Newsom said that as of Wednesday the state has had a total of 16,957 individuals test positive for COVID-19 with 1,154 in intensive care units, and 2,714 hospitalised.The Institute for Health Metrics and Evaluation at the University of Washington in Seattle have predicted that the US has not seen the worst of daily number of recorded cases.”The US will reach its highest daily number of deaths on or around Sunday, according to modeling,” states the report.

Latest reports from the US have also identified black Americans as recording a disproportionately higher rate of infection and deaths. In Louisiana for example, over 70% of fatalities are black Americans while they make up only 1/3 of the state’s population.

At the same time, more than 120 nursing homes across the country have reported coronavirus infections including a facility in Redondo Beach California with four deaths and 38 cases.

A Los Angeles health official has come out to advise families with relatives in nursing homes to seriously think about taking them home.