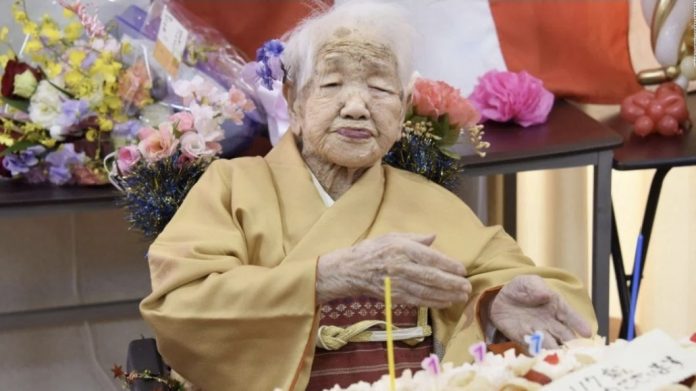 Guinness World Records said they were saddened to hear of Tanaka’s passing, and said the news of her death had been confirmed by senior gerontology consultant Robert Young, who also helped confirm her record as the oldest person alive.

Tweeting about her death, Guinness World Records said: “She became the oldest living person in January 2019 at the age of 116 years and 28 days.

“She is also the second oldest person ever recorded, behind only Jeanne Calment who lived to the age of 122.”

Tanaka’s family said in a tweet earlier this month that she had been frequently sick recently and “in and out of hospital.”

Born 2 January in 1903, Tanaka married a rice shop owner at the age of 19, and worked in the family store and and ran various businesses, including a noodle shop until she was 103.

Also in the year of her birth, Theodore Roosevelt was US president and Edward VII was British king. The Wright Brothers carried out the first controlled flight of their motor-driven airplane and the Tour de France was staged for the first time.

Tanaka was the seventh of nine siblings.

She got married a century ago, and had four children. She spent her later years in a Japanese care home, where she enjoyed board games and chocolate.

During Tanaka’s lifetime, she had lived through and witnessed many wars remembering when Russia went to war against Japan from 1904-1905, suffering a major defeat.

Her husband, whom she hadn’t met before their wedding day, fought in the Second Sino-Japanese War in 1937 while her son fought in World War II, and was held as a captive by the Soviet Union.

Twice, Tanaka had survived cancer and lived through a multitude of historical events, surviving two world wars and the 1918 Spanish flu, as well as the Covid-19 pandemic.

Tanaka had been due to take part in the torch relay at the Tokyo Olympics, unfortunately the Covid pandemic prevented her from doing so.

On top of having a sweet tooth, she is said to have risen early at her retirement home, spending time on mathematics and calligraphy.

Japan has the most elderly population in the world. More than a quarter of society are aged 65 or older. Reasons behind long life expectancies have been identified as diet, healthcare, and the fact many older people continue to work into their later years.

Japan’s centenarian population has just hit a record high of 86,510, according to its health ministry, an increase of 6,060 from 2020.

It means that in Japan, one Japanese person in every 1,450 is now aged 100 and over.  Women account for 88.4% of centenarians, including Kane Tanaka dubbed the world’s oldest person.

At the ceremony recognising her as the world’s oldest person in 2019, she said she was happier than she had ever been.