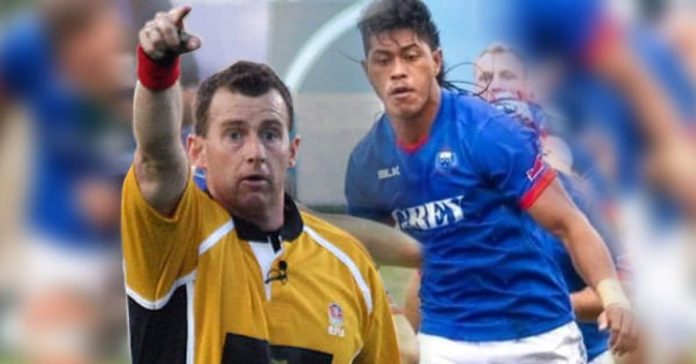 04 August 2019, Suva Fiji. World record holder international referee Nigel Owens has admitted to an error in hearing during the game between Samoa and the USA on Saturday which cost Samoa a try and possibly the game.

At the end of the first half Samoa’s right winger Johhny Vaili deliberately intercepted the ball with his foot before regathering the ball and running under the posts from 50 metres out.

Owens who holds the world record for the most matches ever refereed had already blown his whistle for a scrum after confusion between himself and his assistant referee led the Welshman to call a knock on.

Owens explained to the players that the assistant referee said “blue kicked it forward”, which he heard as “blue knocked it forward”, causing him to blow the whistle and rule for a knock on.

Owns is said to have apologised to the players after the mistake of hearing his fellow official at the less than half capacity ANZ stadium in Suva.

The game was ultimately won by the Eagles 13-10 when USA kicked an injury time penalty but the call by Owens was a significant moment in the game for both teams.

The veteran official is not new to Manu Samoa’s rugby refereeing woes. He was in charge of Samoa’s Rugby World Cup 2011 loss to South Africa 13-5. A game full of discretionary calls by Owens that did not go in Manu Samoa’s favour including a 70th minute yellow card to Samoa fullback Paul Williams when replays showed Williams being repeatedly punched by a South African player.

After that RWC match in 2011 Manu Samoa captain Mahonri Schwalger said, “It felt like it was one way, they were slowing our ball down. It’s got to be fair both ways. The ref was really hard on us.”

The game was ultimately won by a penalty from AJ MacGinty with the last kick of the game, but the call by Owens was a significant moment in the game for both teams

The win to USA means the Eagles are top of Pool A in the Pacific Nations Cup.