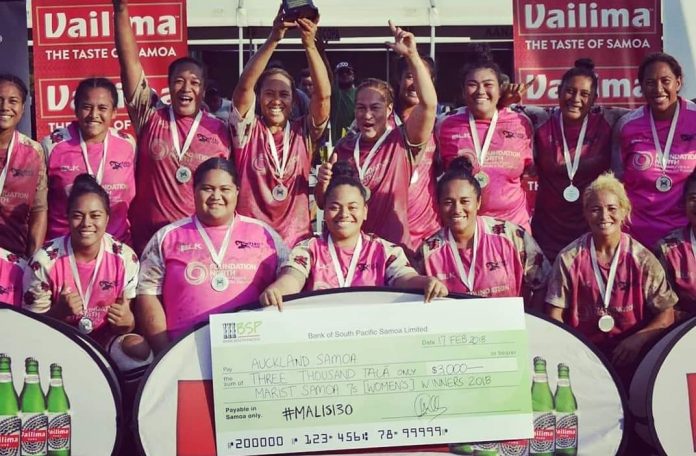 15 January 2019, Apia Samoa. When the 31st Marist International Sevens kicks off on the 15th of February this year at ACP Marist Stadium, Lotopa the women’s competiton will be bigger and better than last year.

The women’s tournament was launched in 2018 for the first time as a new fixture into the annual Marist Sevens event, now in its 31st year since it was introduced by the sports club in 1988.

“The purpose is to create a platform of quality competition for Women’s Sevens Rugby and opportunities for women empowerment and gender equality.”

“In 2018, the Women’s Division became a crowd favorite,” added Fata.

In the final last year, the star-studded Auckland side defeated a Marist Invitational team captained by local veteran Filoi Eneliko.

“We are preparing for a bigger occasion for women’s this year”.

“From our local teams, we are expecting the Police Womens Rugby, Apia Maroons, Aana Blues, Magiagi, and other teams that have been competing in the local womens tournament by Samoa Rugby Union.”

The tournament director confirms that the prize money has also been raised to SAT$5000 from $3000 last year as recognition of the expanded level of competition and to provide an incentive for more women’s teams to participate.

“We have planned for 10 teams to enter and will be divided into 2 pools of 5. Auckland Samoa as defending champions will be Top Seed for Pool A and Marist Invitation for Pool B. A live draw of teams to make up the pools will be done at the official launch scheduled for 1st February 2019.
Registration is still open for teams to register and the entrance fee is SAT$1000.”