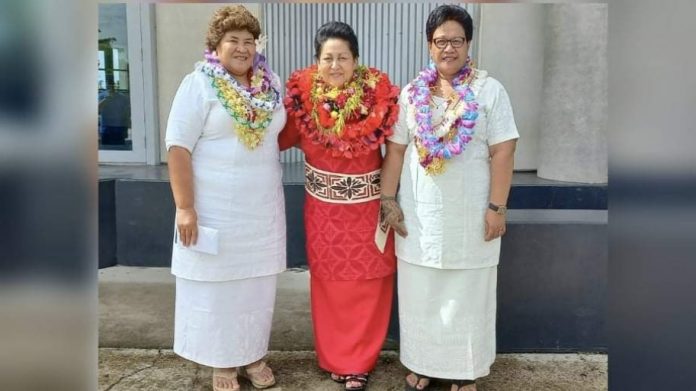 18 June 2022, Apia Samoa. At least two women Members of Parliament who were sworn-in a month ago on the 17th of May have still not received any wages.

Aliimalemanu Alofa Tuuau and Faagasealii Sapoa Feagiai of the Human Rights Protection Partry (HRPP), as well as Toomata Norah Leota of the Faatuatua i Le Atua Samoa ua Tasi (FAST) were sworn in after the Speaker was directed by the Courts to do so.

A Supreme Court decision handed down on 11 May declared the swearing-in as constitutionally required to be carried out at the earliest opportunity, “there being no constitutional or other legal basis by which the swearing in should be further delayed or deferred,” the decision had stated.

Official Dates Read Out by Speaker

When the women MPs were being sworn-in, the Speaker read out the warrants of appointments, signed by the Head of State for each of the new Members of Parliament.

For Aliimalemanu Moti Momoemausu Alofa Tuuau of Alataua i Sisifo, the Speaker stated that the warrant was signed by the Head of State on the 20th of April 2021.

The Speaker then announced that under 84(2) of the Electoral Act, the Head of State had issued a warrant dated 30 November 2021, for the appointment of Faagasealii Sapoa Feagiai as a Member of Parliament, effective from Monday 29 November 2021.

Thirdly the Speaker had announced that a warrant signed by the Head of State dated Wednesday 11 May 2022, declared Toomata Norah Leota an MP under Article 44(1)(A),(B) and (E) of the Constitution of Samoa.

The Government processes salaries and wages every fortnight, and this week was pay week. This week would have been the second government pay week since the women MPs were sworn-in.

The issue was first raised by the opposition during their weekly press conference where former PM Tuilaepa Sailele Maliegaoi called for the women to be paid.

When contacted by SGN, both Aliimalemanu Alofa and Faagasealii Sapoa of HRPP confirmed they had not been paid.

Aliimalemanu Alofa, who has returned to the Parliamentary Finance and Expenditure Committee said their work is well into the assessment of Budget Estimates and hearing from various Ministries for their specific budget allocations.

“It is good to be back in the Committee,” said the former Chair of the Finance and Expenditure Committee. “We all get along very well, which makes our work easier and allows us to stay focused on our assessment of the Budget,” said Aliimalemanu.

A little uncomfortable to speak about unpaid salaries, Aliimalemanu said she only wishes the tension between parties can subside so Samoa can move forward and leave the recent political crisis behind.

When contacted by SGN, an officer of the Ministry of Finance said the payment process is triggered by the relevant Ministry sending through required and completed documentation. In this case, the Legislative Assembly.

Toomata Norah Leota was not available to respond to Samoa Global News, to confirm whether or not she has been paid since being sworn-in.