A graduation ceremony for new recruit police and prison officers was held at Police Headquarters Friday morning, where 57 officers graduated after the successful completion of an extended week programme.

Theodora Selepa Fepa’i Kolia is the 23 year old from Vailele and Sili Savaii who took out the dux of the 2021 new police recruit class.

Constable Kolia was educated at Apia Primary School before spending time in New Zealand attending Henderson North Primary in and St Dominic College in Auckland. She returned to Samoa and completed high school at Samoa College.

The top award amongst Prison Officers went to Monalisa Tofilau. Constable Tofilau and others who have been working as Senior Prison Officers had not yet completed the vigorous police recruitment course, and took up the opportunity to further their careers. 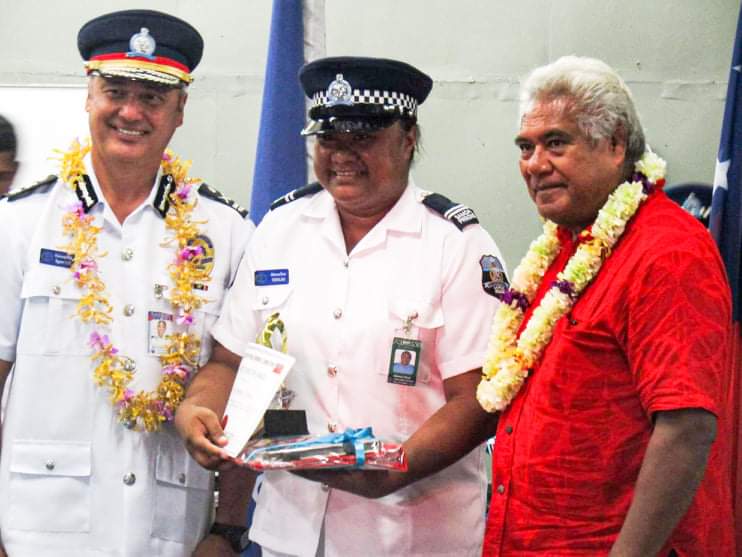 Tofilau expressed her gratitude for the chance to complete the training, which allows her and others from Prisons to undertake tasks assigned to police officers.

The cultural shift of women joining Samoa’s police force and taking up key positions has been evident since Police Commissioner Sua Fuiavailiili Egon Keil took up the leadership of the Ministry in March 2015. Today, all Units of the Samoa Police consists of women staff in what used to be male dominated areas such as the Nafanua Patrol Boat, dog handler with the K9 Unit and the Tactical Operation Squad which requires the carrying of arms.

Su’a himself is flanked by women in the highest leadership positions with Deputy Commissioner Papalii Monalisa Tiai-Keti being the first appointment to be made by Fuiavailiili after reforms. Several other women now hold Assistant Commissioner levels of managements within the Samoa Police.

The 57 graduates have come through a vigorous screening process where over 300 applications were received.

The 57 officers have pulled through a comprehensive and demanding recruit course program introduced by Commissioner Keil. There were over 300 applicants, and only 68 were eventually invited to take the course. A further 11 could not complete the program and pulled out.

Honourable Minister Faualo Harry Schuster gave the keynote address and encouraged the graduating class to adhere to the requirements of the law. He also acknowledge the support of parents and loved ones of the graduates.

Commissioner Su’a Fuiavailiili Egon Keil and his executive congratulated the new officers, and warmly welcomed them into the family of men and women in blue.