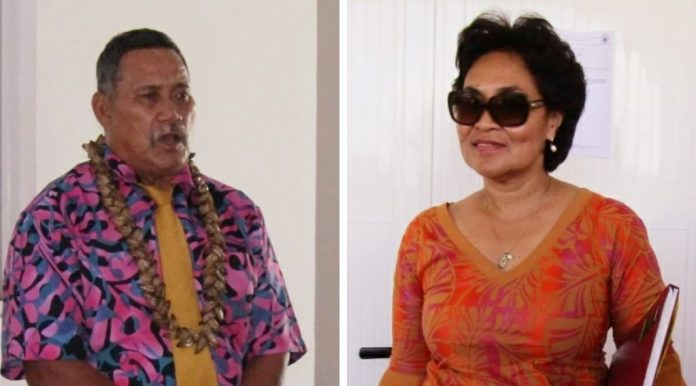 2 July 2021 Mulinuu Apia Samoa. One of the four women who competed and were elected at the April 9th general election has been asked by her petitioner to step down as a Member of Parliament, and not run in the by-election.

Aeau Leota Tima Leavai secured the Falealupo seat by polling 54% of all votes casted, a percentage not attained by many who won at the polls on April 9th. Of the 28 seats petitioned, only three other candidates achieved more than 54% of votes including Matatumua Vasati Pulufana who won the Faasaleleaga seat with 63%. (Loau Keneti Sio 59% and Niuava Eti Malolo 59% the other two). 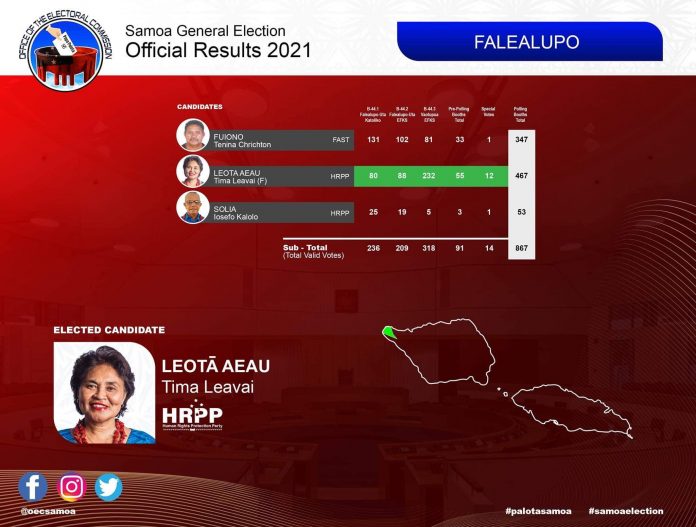 In a three candidate race, the senior partner of Leavai Law ran against two men; another candidate from HRPP, and FAST candidate Fuiono Tenina Crichton.

Aeau polled 467 votes while her petitioner, Fuiono got 347. Only three other women won at the polls on April 9th – Hon Faimalo Kika Stowers, Matamua Vasati Pulufana, and Mulipola Anarosa Molioo. The uncontested seat of FAST party leader Hon Fiame Naomi Mataafa, had made up the five women MPs.

Speaking to the media outside Court when the petition was first called this week, Fuiono Tenina Crichton said he wanted Aeau Leota Tima to step down from the seat, and he aslo wanted her to agree not to run in the consequent by-election. The terms would then allow himself or another matai being considered, to run the by-election without the elected women MP.

Fuiono also said earlier this week that they have requested as a condition of withdrawal, a “pasese” of $10,000 tala.

In Court this afternoon, the petition by Fuiono was withdrawn, together with the counter-petition by Aeau.

Speaking separately to the media outside Court both Fuiono and Aeau did not elaborate on the final terms of negotiations except to say the mandated public notices of withdrawals would now be done.

The Supreme Court adjourned the matter to next Friday 9th July 2021.