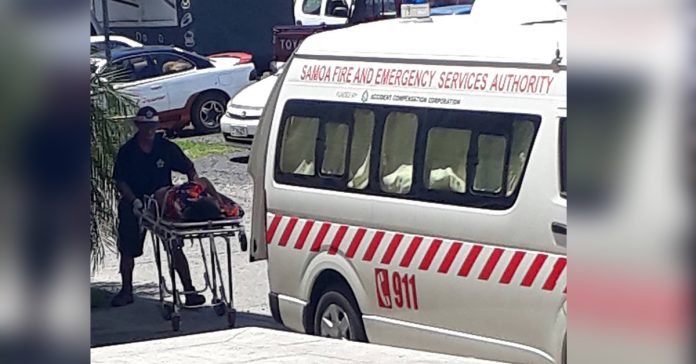 14 March 2019, 6:30pm – A woman was seen carried out in an ambulance from the Court house at Mulinuu earlier this week.

According to a court official who did not want to be named the woman came to attend her family matter at the Lands and Titles Court when she collapsed outside the administration offices.

The official said this is the second time this same woman had collapsed at the court premises. The same woman also collapsed late last year during family Lands and Titles Court matters, and staff of MJCA had called the ambulance who had also taken her for treatment.

The woman was seen being carried out from inside one of the administration offices of the court house.

However, the court official said she had collapsed outside, and people there at the time had to carry her inside to wait for the ambulance.

Another employee of the court told Samoa Global News the lady was already unconscious when she was being carried into their office.

“She was snoring and shaking so much when she was being carried in;

“We had to call the ambulance and it was great that they respond within 5 mins;

“We hope she is okay, but her family member who was with her said this is normal for her and that she just needs to get her shot from the hospital and she will be okay.”