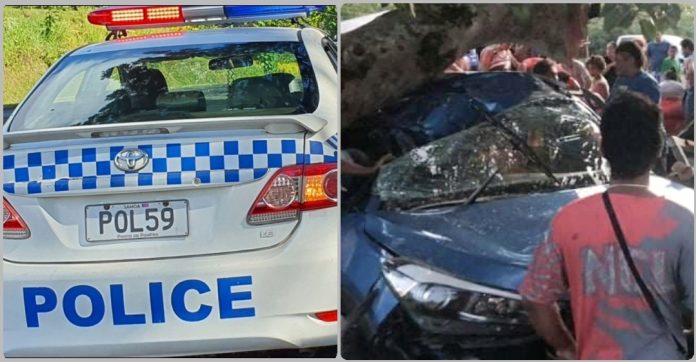 An afternoon volleyball at Leusoalii was disrupted when two speeding cars drifted off the road, crashing into nearby trees, also injuring an innocent village youth who had been walking along the road. The little girl was treated in hospital for injuries sustained and then released.

Members of the village volleyball team said a “blue rental” had tried to overtake a “small brown car” but there were vehicles heading in the opposite direction that were also overtaking each other.

“The blue rental and the brown car were going in the same direction, from Apia to kuā..but there was a black car coming from kua e alu i Apia, that’s the missing link to this accident”, a witness told Samoa Global News.

The vehicles carrying a total of six people embedded under pulu trees; and the villagers including members of the volleyball team ran in to help.

According to those who first arrived at the scene, smoke was seen coming from the car engine of the blue vehicle, so the villagers rushed to pull passengers out of the cars.

“The crash happened while we were playing volleyball. We all ran over and the guys immediately tried to pull the people out..

“A village girl who was walking on the road was also hit..

“The cars started smoking up.. so the guys tried pulling everyone out, but the last two people were jammed, so we had to work together to free the vehicle, pulling it out from under the pulu tree..

“When the first response car arrived, we yelled out to take the little girl first..”

Witnesses said a second police ute arrived and took one of the women from the blue rental next.

“She was falling in and out of consciousness..and she had cuts and bruises all over her arms..”

“While the guys were still trying to get the rest out, I went and sat with the man they had also pulled out of the blue rental. He too was dazed, falling in and out of consciousness, but I just talked with him, and tried to get him to stay awake”.

Witnesses said more first responders arrived and took another man and a woman from the blue rental.

“The woman who was stuck in the rental had the worst injuries of them all..

“The man I was sitting with was the last to be taken from the passengers of the blue rental”.

“The two guys from the brown car waited a bit longer for help..

“We all stayed until it was dark and some of our volleyball boys went in the cars to the hospital, to help the people injured”.

One villager, whose partner had helped to pull people out of the blue car, said the horrific scene of what they saw and experienced that afternoon had affected them all.

“He cried as he recalled what he saw, as they were pullng them out 😔..”

Police Commissioner Su’a Fuiavailiili Egon Keil has confirmed one death, a woman was pronounced dead upon arrival to the TTM national hospital at Moto’otua.

The sad news of the passenger’s death was posted onto social media. It reached the witnesses before the devastation had even cleared up at the scene.

“Yeah we saw comments regarding the life lost 😞.. If she was out of the car first, we would have taken her to the hospital first, but sadly she was one of the two people stuck in the car..”

Police Commissioner Su’a Fuiavailiili Egon Keil said the police were contacted at about 6:30 pm Saturday, on the eve of Father’s Day.

“Yes the collision occurred on the main road in the village of Leusoalii. The primary vehicle had four occupants and the secondary vehicle had two occupants. The injured individuals were taken to hospital, however, a female passenger from the primary vehicle was pronounced dead upon arrival. The other three were admitted. One was released this morning while two remain in hospital,” confirms the Police Commissioner.

“Further, a juvenile pedestrian was struck during the incident. The juvenile was also transported to hospital, treated and later released”, adds Su’a.

The Commissioner als says preliminary investigations reveal that alcohol was involved in the incident.

“Charges are expected to be filed in the coming days, once the investigation is complete”, says Su’a.