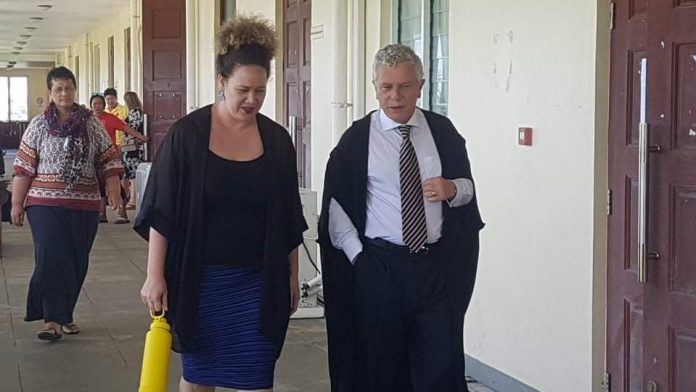 The cause of an arguement that arose between Herman Paul Westerlund and Jeremiah Malaki Tauiliili on the night of 30th November 2018 may have started with a disagreement over matai titles according to one of the witnesses who testified in Court today.

Wesley Teo told the Court that he had seen Herman and Malaki arguing that night, and overheard the title of Sulamanaia from Laulii being discussed.

26 year old Teo says he and Herman arrived at the Glass Lounge just after midnight. He walked in and went straight to the bar to buy himself and Herman a Taula beer. While he waited to be served he saw Malaki approach Herman.

“When I gave Herman his bottle I could see they were having an argument. I could hear them arguing over the matai title of Sulamanaia from Laulii”.

Wesley Teo told the Court that Herman Westerlund had been bestowed a matai title in Laulii on that same morning.

He said Herman had called him on the 29th of November to ask for his help with tips of Samoan words to say during the bestowal ceremony. Wesley says he then attended Herman’s matai bestowal at 5am on the 30th of November, the same morning of the tragic incident.

When asked by defense counsel Aaron Perkins QC during cross examination, Teo confirmed that the arguement was about title bestowals.

“The three of you were together and you overhead the title being discussed?” asked Perkins.

“Did you get the impression that Malaki was not happy with the title Herman had received?”

“Do you remember Herman saying…Brother don’t be like that?”

Wesley Teo told the Court that Malaki had then walked away from Hermann but while he was at the bar getting their second round of Taulas, he saw Malaki comimg back to where Herman stood.

I saw Malaki approach Herman again. I walked towards Herman and gave him his beer. I asked Malaki if there was anything happening but be said, no.

Wesley Teo told the Court that Rob Ash had punched Malaki first. It was then that Herman got involved and tried to walk Malaki out of the night club.

“I was standing infront of the Women’s toilets. On my right was Herman and Malaki at the bar. Then I saw Malaki had fallen down when Rob punched him. Malaki stood up and was fia ulavale”.

Asked by Prosecution how they tried to take Malaki outside, he said Herman embraced the deceased, while he held Malaki’s right hand.

Teo said it was at that time that a cousin of his who was there, Mr Bill Brown came and pulled him away and told him to not get involved.

“While I was facing Brown I heard a big sound like a rock was being thrown onto the floor”.

“I turned and tried to remove Herman”.

Prosecution asked Wesley Teo what he had seen?

“When I turned around Malaki was lying face up. Herman was punching Malaki on the floor”.

“I then tried to remove Herman but he let go of my hand and punched Malaki”.

Asked how he would describe Herman at that time, Wesley said, “angry”.

Teo was asked to demonstrate the punch which he did in Court by taking his right arm back, and taking an inward swing from above his head.

He says the punch while Malaki and Herman were both on the floor, had hit Malaki on his mouth.

Prosecution then played video footage from the surveillance cameras showing inside the night club. A large TV screen facing the witness was also visible to the public inside the Court room.

Video footage showed Herman and Wesley seemingly trying to guide Malaki out of a crowded night club, as Wesley Teo had described earlier.

Wesley was asked to pause the video when it got to the part where he heard a loud bang, and secondly when he had seen Herman punch Malaki while on the ground.

“Can you say “pause” when you see the time on the video that you heard the loud bang, and again when you say you saw the punch while both men were on the floor”, said lead prosecutor Silupevaelei Rexona Titi of the Attorney General’s Office.

Two other ladies testified on Day 2 of the hearing with both noting the loud bang, likened to a rock being thrown to the floor when Malaki had hit the ground. Similar testimonies were heard by others who had given evidence on Day 1 as reported by Samoa Global News.

27 year old Annette Tamasese told the Court that after Wesley and Herman had gone outside she tried to grab Malaki’s phone from the floor but before she could get to it, the accused Suapaina Savaiinaea grabbed the phone and then kicked Malaki on the head as he walked past.

Leiataualesa Jerry Brunt put to the witness that she could have been too focused on the phone and did not really see who had kicked Malaki.

“You don’t know exactly who applied that kick… and most of what you know about the guy who kicked Malaki on the head was from facebook,” suggested defense counsel.

Tamasese confirmed that she saw Savaiinaea and described him as having worn a black hat and a red t-shirt.

She says she is sure that it was Suapaina Savaiinaea because he turned back as he walked away and that’s when she recognised him.

Tamasese also testified to the involvement of Mr Rob Ash who was charged in the District Court for a lesser offense in relation to the punch he had thrown that night.

“I heard Rob yelling and people pushing Malaki, and I saw Herman holding him away,” said Tamasese.

“I saw Herman punch Malaki and they both fell down. I heard the sound of the head hitting on the floor.”

Tamasese also says she then heard someone ask, Who is this person was and did he do that.

“And then I saw Herman throw another punch towards Malaki but I don’t know where it landed. Malaki was unconcious and Filipo was trying to wake him up and put water on his face.”

Another witness that followed, 26 year old Gardenia Su’a who works at MNRE confirmed that she saw blood on the floor.

When asked how much blood she had seen, the witness said, “It was the size of two 10-dollar notes”.

Gardenia also testified that she heard the owner of Tanoa apparel yelling at Savaiinaea, “Why did you have to kick him for?”.

So far only 8 of the 30+ prosecution witnesses have been called.

Assistant Chief Executive Officer of MJCA Ve’atauia Faatasi Puleiata has taken up the interpretation role for this case. In his seasoned articulate flair, Faatasi is interpreting English to Samoan and Samoan to English for counsels’ questions and witness’ responses.

The judge-only trial continues before Justice Mata Keli Tuatagaloa and is expected to take at least two weeks.