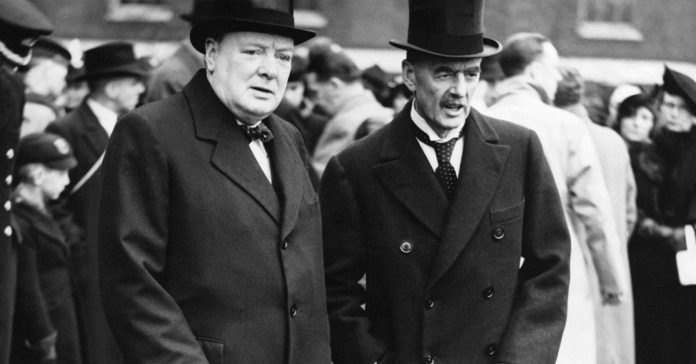 Winston Churchill, First Lord of the Admiralty, is called to replace Neville Chamberlain as British prime minister following the latter’s resignation after losing a confidence vote in the House of Commons.

In 1938, Prime Minister Chamberlain signed the Munich Agreement with Nazi leader Adolf Hitler, giving the Sudetenland region of Czechoslovakia over to German conquest but bringing, as Chamberlain promised, “peace in our time.” In September 1939, that peace was shattered by Hitler’s invasion of Poland. Chamberlain declared war against Germany but during the next eight months showed himself to be ill-equipped for the daunting task of saving Europe from Nazi conquest. After British forces failed to prevent the German occupation of Norway in April 1940, Chamberlain lost the support of many members of his Conservative Party. On May 10, Hitler invaded the Low Countries—Belgium, Luxembourg and the Netherlands—and France. The same day, Chamberlain formally lost the confidence of the House of Commons.

Churchill, who was known for his military leadership ability, was appointed British prime minister in his place. He formed an all-party coalition and quickly won the popular support of Britons. On May 13, in his first speech before the House of Commons, Prime Minister Churchill declared that “I have nothing to offer but blood, toil, tears, and sweat” and offered an outline of his bold plans for British resistance. In the first year of his administration, Britain stood alone against Nazi Germany, but Churchill promised his country and the world that the British people would “never surrender.” They never did.