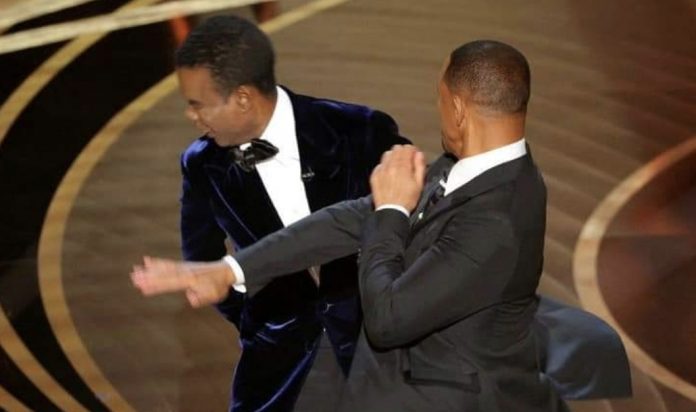 Shortly before he was poised to win his first Academy Award for King Richard, Will Smith made the Oscars theatre incredibly uncomfortable—and confused the heck out of the viewers at home—when he appeared to confront presenter Chris Rock on stage for making a joke about his wife Jada Pinkett Smith’s lack of hair.

“I’m going to,” a visibly unnerved Rock said, shaking his head. He seemed like he wanted to say something back, but ultimately decided to move on and announce the nominees for Best Documentary.

Many in the Oscars audience appeared stunned at the altercation. Diddy was the next presenter during the ceremony, where he came on to introduce the 50th anniversary celebration to “The Godfather.” Diddy addressed the situation by saying, “Will and Chris, we’re going to solve this like family. Right now we’re moving on with love. Everybody make some noise.”

Will Smith’s publicist Meredith O. Sullivan came by him at the commercial break to have a discussion. Also during the break, Denzel Washington got up to speak to Smith privately.

Sullivan continued to visit Smith during each commercial break following the incident. Oscars producer Will Packer also visited Smith before the best actor category was announced. Smith was nominated for his performance in “King Richard” and won the Oscar later in the ceremony.

As viewers were still processing the incident, the King Richard star was announced as the night’s Best Actor winner. An emotional Smith took the stage, tears in his eyes, and apologized to the Academy and many others, but not to Rock.

Smith drew parallels between the moment he was having and the life of the man he played onscreen — Richard Williams, father to Serena and Venus.

Smith looked to his right and said “Thank you D,” to fellow Oscar winner Denzel Washington, who was sitting up front with tears in his own eyes. “Denzel said to me a few minutes ago, “At your highest moment, be careful, because that’s when the devil comes for you.”

He then took a long pause and gathered himself.

Last December, Pinkett Smith opened up about her struggles with alopecia, revealing that she had decided to shave her head instead of constantly dealing with hair-loss issues. “Mama’s gonna have to take it down to the scalp so nobody thinks she got brain surgery or something,” she posted on Instagram at the time. “Me and this alopecia are going to be friends … period!

The dramatical incident has attracted mixed emotions from fans across the world. Some sympathising and saying the joke had gone too far, but most disappointed with Will Smith’s response, as a role model Hollywood star.