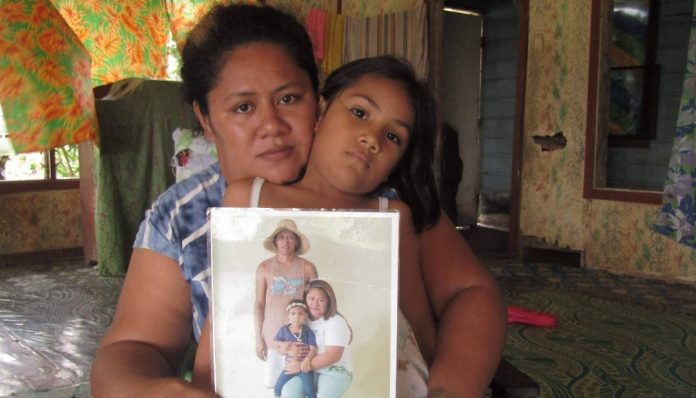 A mother is still trying to come to terms with the sudden death of her husband, taken from them after an incident at Vailele on Father’s day weekend where he was brutally beaten, allegedly by a 20 year old village youth who used a laupapa 2×6 piece of timber.

Tuitama’i Niko Moegalupe, 43, passed away at Motootua National Hospital five days after the vicious attack that left him with traumatic head injuries.

In an exclusive interview with Samoa Global News Mrs Phoeberose Ioane tells of the nightmare she endured to see her husband suffering in pain, before his death.

“What was most difficult for me was looking at my husband’s injuries; his head was in bandages, his eyes were swollen and bruised and there was a hole under his jaw,” she said in tears.

He fought to stay alive for five days with his wife by his bedside, but lost his battle on Friday 13th August 2021.

“I was shocked and devastated. I did not expect this nightmare would ever come upon me;

“We live with his elderly aunty at Vailele and on that Saturday of Father’s Day, at about 12:45am he left home and went to his brother’s house that is more inland of Vailele. That was the last I saw of him on that day,” Phoeberose said.

“It was the worst Father’s Day of my life, when his brother came to tell me that my husband was critically injured, and that he had been taken by ambulance to the hospital”.

Phoeberose says her husband was conscious during the days they spent in ICU, but she could see that he was in excruciating pain.

“I was so happy when on Sunday evening, he woke up and was trying to remove his head bandages,” Phoeberose said.

“But he tossed and turned from the pain in his head”.

“The saddest part was to see his mouth and ears bleeding..”

Phoeberose said Niko’s condition remained the same throughout the week until Friday.

“That’s when I could see there was a slight change in his breathing and I knew that my husband could not bear the pain anymore.”

The grieving widow says she was only told the details of the incident after her husband had passed away.

“I was told that the suspect assaulted my husband’s nephew and that’s what made him angry. He supposedly chased after the young man and beat him with a stick,” Phoeberose said.

“I was told my husband was then attacked while he was sleeping in their family’s fale tele that morning. And my husband knows the kid very well.”

In tears, Phoeberose spoke frankly and said this is a wake up call for fathers to never take these youth for granted.

“Youth nowadays will fight back and put up a challenge. They have this determination to retaliate and harm anyone that bothers them or beats them,” she said.

Phoeberose also admitted that her husband had a problem with his drinking.

“We argued almost every single day over his alcohol,” she shares.

Phoeberose has two children with Tuitama’i Niko. Her husband also has five older children from his previous marriage.

Phoeberose says it is devastating that a father of seven would be taken away from an attack that happened on Father’s Day weekend.

“We will miss him. It’s hard to forget him because despite everything Niko was a hardworking father who loves his children very much”.

Naseri Lefia Taugofie, 20, is in custody awaiting a lawyer through legal aid. He appeared in Court unrepresented this week and faces charges of murder, manslaughter, grievous bodily harm, actual bodily harm and armed with a dangerous weapon.