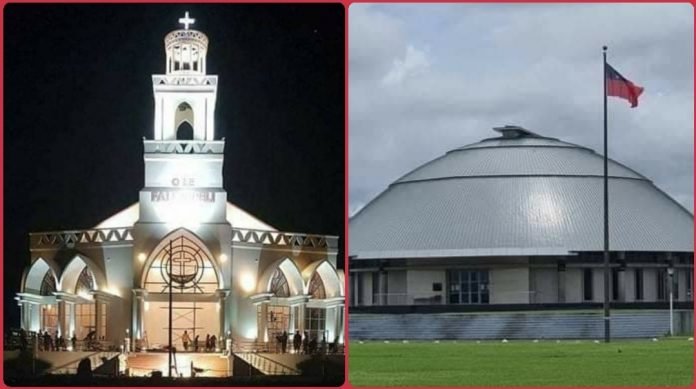 THE CHURCH AND POLITICS

The Definition of “POLITICS”

The words “Politics” and “Political” maybe given either a broad or a narrow definition.  Broadly speaking, “politics” denotes the life of the city (polis) and the responsibilities of the citizens (polites).  It is concerned therefore with the whole of our life in human society.  Politic is the art of living together in a community.  According to its narrow definition, “Politics” is the science of government.  It is concerned with the development and adoption of specific policies with a view to their being enshrined in legislation.  It is about gaining power for social change.

Once this distinction is clear we may then ask the following question:

Was Jesus involved in “Politics?”

In the broader definition, however, his whole ministry was political.  For he had himself come into the world in order to share in the life of the human community, and he sent his followers into the world to do the same.  Moreover, the Kingdom of God he proclaimed and inaugurated was a radically new and different social organisation, whose values and standards challenge those of the old and fallen community. In this way, his teaching had political implications.  It offered an alternative to the status quo.  His Kingship, moreover, was perceived as a challenge to Caesar’s, and he was therefore accused of sedition.

It is irrelevant to state that Jesus and his disciples were not interested in “politics”, and that they neither required, nor even commended political action, let alone engaged in it themselves.  This is true.  They did not.  Yet, although “politics” is about the business of the state, it is also about the gaining of power and the exercise of power. The fact that Jesus had a very different view of power was one of the reasons why he was feared by the politicians of his day, and why political leaders saw him as attacking their government.  It is for nothing that Mary in the Magnificat said, “He has brought down rulers from their thrones but has lifted up the humble” (Luke 1 : 52).  Although the teachings of Jesus was not overtly political, it subverted unjust political structures, challenged oppression and promised people that there was a new kingdom, characterised by justice, in which truth rather than political promises set people free.  The impact of this on social and political life was so profound that it is quite legitimate to talk of the “Politics of Jesus”.

The outworking of this teaching took some time to have an impact.  We have to remember that Christ’s followers were a tiny, insignificant minority under the totalitarian regime of Rome.  The legions were everywhere and were under orders to suppress dissent, crush opposition, and preserve the status quo.  The question is:  Would they have been politically active if they had had the opportunity and the likelihood of success?  I believe they would.  For without political action some social needs simply cannot be met.  The apostles did not demand the abolition of slavery, but are we not glad and proud that the nineteenth – century Christians did?  Their campaign was based on biblical teaching regarding human dignity, and was a legitimate extrapolation from it.  The apostles did not build hospitals either, but Christian hospitals are a legitimate extrapolation from Jesus’ compassionate concern for the sick.  Just so, political action (which is love seeking justice for the oppressed) is a legitimate extrapolation from the teaching and ministry of Jesus.

When faced with the complexities of modern life, Christians can be tempted to move to one of two extremes.  Firstly, they can succumb to despair and even cynicism.  They cite disagreements between Christians, a Bible which is out of date and issues which can be understood by experts as the reasons why things are hopeless.  They do not trust God to speak to us through the Scriptures and to lead us into the truth.  Secondly, others can be naïve and simplistic.  They want quick solutions and often see the issues in black and white rather than reflecting wisely on them in the light of Scripture.  They may deny the problems, cite proof texts, rubbish those who disagree with them and do anything rather than grabble with the issues that face us in the light of Scripture.

However, even when we have done our homework and discussed, debated and prayed together, we need to ask, “On whose shoulders does political responsibility rest?”  Failure to ask and answer this question is one of the main reasons for the current confusion over Christian political involvement.

All individual Christians should be politically active in the sense that, as conscientious citizens, they will vote in elections, inform themselves about contemporary issues, share in the public debate, and perhaps write to a newspaper, lobby their member of parliament or take part in a demonstration.  Further, some individuals are called by God to give their lives to political service, in either local or national government.  Christians who share particular moral and social concern should be encouraged to form or join groups which will study issues at a deeper level and take appropriate action.

Should the Church as a whole involve itself in politics?  Certainly, the Church must teach the law and gospel of God.  This is the duty of the Church’s pastors, teachers and other leaders.  And when the Church concludes that biblical faith or righteousness requires it to take a public stand on some issues, then it must obey God’s Word and trust him with the consequences.  At least we can agree that the Church should not enter this field without the necessary expertise.  But when Church leaders do their homework thoroughly, and take time and trouble to study a topic together in order to reach a common action, their informed and united stand is extremely influential.

I end this opinion with what maybe a rather surprising reference to the Roman Catholic mass. The word “mass” is said to be derived from the final sentence of the old Latin rite, It e missa est. In polite English, it might be rendered, “Now you are dismissed”.  In more blunt language it could be just, “Get out!”  – out in the world which God made and godlike beings inhabit, the World in which Christ came and into which he now sends us.  For that is where we belong.  The world is the arena in which we are to live and love, witness and serve, suffer and die for Christ.