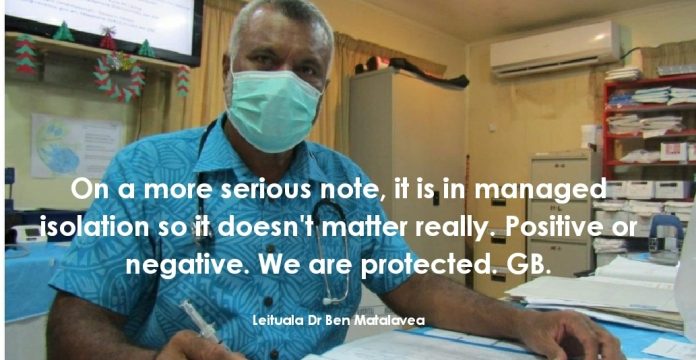 Following a lot of light hearted jokes and memes on social media regarding the uncertainty of test results of a Samoan sailor who tested positive for COVID-19 last Wednesday, and negative on Thursday morning; a medical doctor says whatever the result, Samoa remains safe because the young man is in managed isolation.

Responding to questions from Samoa Global News Clinical Director of the National Kidney Foundation and former Manager and Director of Clinical Services for NHS, Leituala Dr Ben Matalavea says this is not a community case, so Samoa is safe and there is no need to panic and call for further lockdowns.

“On a serious note (referring to left and right nostril test results), it is in managed isolation, so it doesn’t matter really. Positive or negative, we are protected”, says Dr Matalavea.

Leituala says the Government has had “positive” case protocols in place since last Wednesday and the single suspected case in managed isolation does not pose a threat to the community whatsoever.

“Once community transmission occurs, then lockdown is appropriate; he says.

“If it is in managed isolation, then it is not out in the community, so there is no need for an absolute lockdown” adds Leituala.

Doctor Matalavea says honest and timely release of information by the authorities is essential at this time.

“I think the Government has been doing a great job in that respect so far”.

Many on social media including members of opposition political parties have called for the cancellation of the last three repatriation flights scheduled to  bring citizens home before Christmas.

The Press Secretariat has called a press conference to update the community at 4pm today, Wednesday 25th November 2020.