The Taula All Star tournament shifted to Apia Park for its second week, and with it, performances of all 4 teams for both divisions lifted to a whole other level. The matches were close and the crowd at Apia Park stadium enjoyed an afternoon of quality grassroots rugby.

The shortened season by the Apia Rugby Union divides its registered clubs into 4 teams, named after the tournament’s major sponsor; Taula Beverages. Each team has been allocated three clubs with the playing squad selected as an “All Star” side.

Taula South sees a combination of Vaiala, Magiagi and Letogo while Taula North is selected from Apia, SCOPA and United Brothers.

In Round 2 yesterday, Taula West clinched the win over Taula East 26-20 in a close match that had supporters from both sides at the edge of their seats.

Easts were parked inside the West red zone for the last 10 minutes of the game, and the pressure mounted for Faleata West when the referee sent off one of their players for back chatting. A tired looking Easts could not penetrate the wall of courageous, and much fitter looking youngsters that made up the West’s defensive line.

Samoa has discovered the next Manu Samoa loose forward / lock with Taula West’s secret weapon aka Theodore McFarland who looked to be covering every position on the field, setting up tries with athletic flair and scoring one of his own.

A Samoa double International for rugby and basketball, McFarland would set up his team’s tries with sonny bill williams flick passes that were well read by his team mates, and thoroughly enjoyed by the Apia Park crowd.

Taula South were saved by the bell and the boot of Patrick Faapale, to beat a courageous Norths who almost pulled off the come-back of the decade, before sliding behind 34-30 at full time.

With a 12-7 Round 1 win over Taula North last week, the Savaiinaea Gustav Slade coached West side remains undefeated, and face off this weekend with tournament favorites Taula South, coached by Chris Faaofo.

With two undefeated teams, this weekend’s draw will therefore be a repeat of the All Star finals scheduled for Saturday 11th July.

The tournament has allowed for excellent combinations of coaching staff from various clubs to share resources and work together.

Coaching/Management line up for the All Star teams are:

Don’t miss out, come down to Apia Park and enjoy the Taula All Star tournament Round 3 this Saturday. 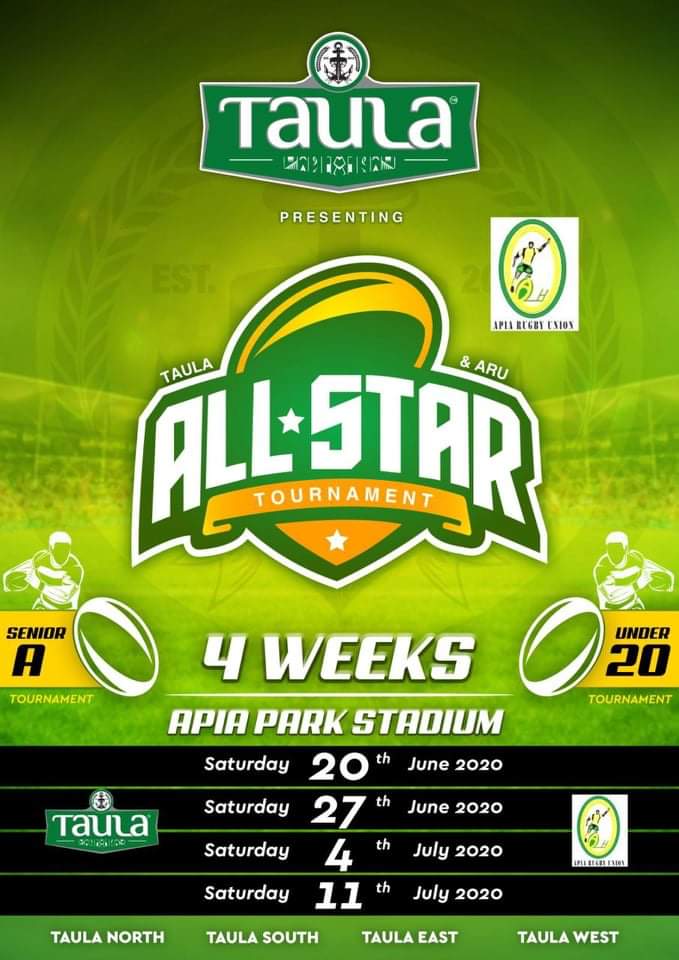