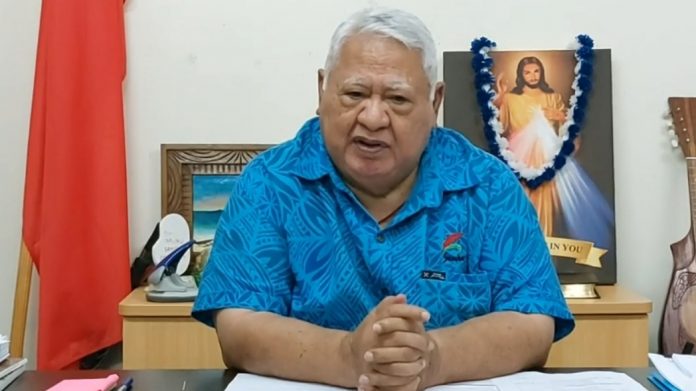 The leader of the opposition and former Prime Minister of Samoa, Hon Tuilaepa Dr Sailele Malielegaoi has hit back at allegations made against him on the front page of Samoa’s only daily print newspaper which headlined, “Tuilaepa allegedly distributed $200k”.

Speaking to the media at a special press conference to address the matter on Monday afternoon, Tuilaepa said the public allegations against him and the Lepa District Development Committee were far-fetched and completely untrue, with no basis or evidence to support them.

“The Samoa Observer should have spoken to me about their news article, and I would have been able to give them the truth,” he said. “I want to correct this piece of publication from the FAST because they are not true, and I have already spoken to the Observer.. it would have been better for them to come and see me..”

“The Minister of Agriculture… asserted that our committee had distributed the $200k assistance to the villages… we never did that,” stated Tuileapa.

The article quoted the Chairman of the ruling Faatuatua i Le Atua Samoa ua Tasi party, Hon Laaulialemalietoa Leuatea Polataivao Fosi Schmidt, alleging that Tuilaepa had ‘illegally’ distributed the $200k tala grant funding which had been given to each of Samoa’s 51 districts.

The government funds come with procurement guidelines, tagged for development projects to be led by District Committees that are Chaired by the 51 elected MPs.

The MP from Lepa was reported to have allegedly distributed the funds as cash hand outs to villages within the district.

Laaulialemalietoa had made the allegations on the EFKS Church Television Network, where members of the FAST party get regular airtime on the network’s Soalaupule programme. The FAST party leader goes on to accuse Tuilaepa for acting illegaly and suggested that further action would be taken against the suspended leader of the opposition.

Speaking to the media, Tuilaepa who is also one of five Fellows of the Samoa Institute of Accountants and the first Samoan to receive a Masters degree in Commerce, said no such cash hands took place.

Tuilaaepa said the Lepa District Development Committee’s books are being overlooked by an accountant, and their financial reports have been prepared and ready for an external audit as required by the funding guidelines.

“Our reports that were preapred by our accountant are now ready to be given to an auditor,” he said.

Tuilaepa said the funds went towards the establishment of the Head Office for the District Committee, mostly renovation costs to the local EFKS church building which they will be leasing.

“Air conditioning units, computers, desks and chairs, stationery.. and resources needed for the work.. that is where part of the funds were spent, as set out in the guidelines.”

Tuileapa said the only distribution of funds is to ensure the lease payment for meeting space is fairly distributed to all three villages of the district.

“Lepa district is following the government’s public announcement that offices can be leased from a suitable building within the district. The building which has been renovated for lease belongs to the EFKS church in Lepa,” he explains.

Tuileapa said the issue of paying a lease is a good idea, if it can benefit all villages of the constituency.

“However, we now meet in one village, but when the lease is paid to EFKS Lepa, a portion of that is given to the other two villages,” he said.  “We considered it fair that the lease payment benefit all three villages of the district of Lepa.”

Tuileapa then went on to say that in some distrticts, the office lease expense is being collected by the Members of Parliament themselves, because the Head Offices are located on their properties.

“I want to make this clear,” said Tuileapa. “that what we are doing is in accordance with instructions given to us by the government, and we do hope that all their reports of how the finances are being used by their Ministers and their MPs are also properly investigated and subject to audit.”

“Because what we have heard, there is much to be desired to what they have done.”