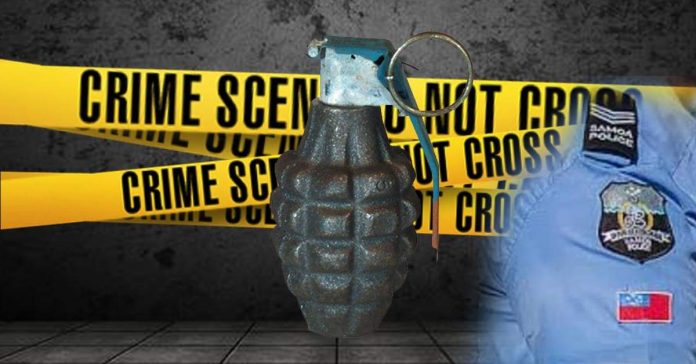 29 April 2019, Apia Samoa. A consignment from Australia, feared to have contained a live hand grenade, caused the Samoa Police to seal off a building and surrounding areas in Salelologa Savaii today.

The freight forward Agent told Samoa Global News that a Samoa Customs officer was carrying out his usual inspection when he discovered what was  suspected to be a hand grenade.

“This box crate was from Australia, the customs officer found a hand grenade inside it;

“As soon as the customs officer found this he evacuated the building, sealed off everything and called the police;

“I take my hat off to this customs officer for the swift and professional way that he acted on this matter;

“So now we are waiting for the police to confirm if it really is a grenade because it was very heavy,” he said.

The Samoa Police have issued a statement to confirm that they have sealed off the main road infront of the Bluebird Mall and the LTA office in Salelologa, advising the public to seek alternative routes when traveling to the wharf and market.

“We have what appears to be a live hand granade and we are attempting to disarm it,” said the Police Commissioner.

“The area is closed off until we do so”.

A source told Samoa Global News that the consignment was for a man who currently resides in Palauli, Savaii.

This is a developing story as the Samoa Police continue to work on the suspected live grenade.

Note: Updated 2.30pm 30 April 2019. We apologise for the racial profiling reference in the previous version