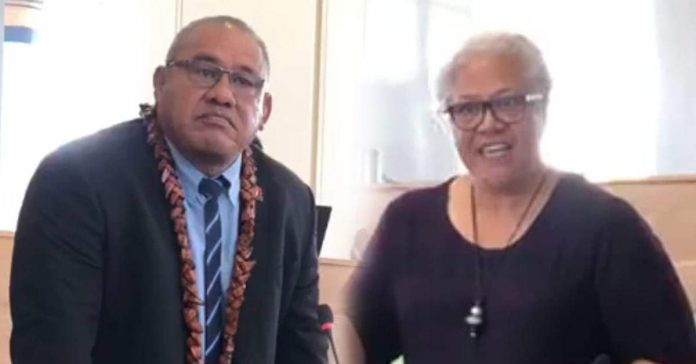 02 July 2019, Mulinuu Samoa. Deputy Prime Minister Hon Fiame Naomi Mataafa told Parliament that the message they are sending is that it is ok for a Judge to participate in criminal activity as long as it were outside of the performance of his work duties.

President of the Lands and Titles Court Fepuleai Atila Ropati will return to his position following a conscience vote in Parliament yesterday when 18 MPs voted against a motion to remove him following his conviction by the Court of Appeal for hitting the Ministry’s night watchman twice on the head with a beer bottle at the staff Christmas party.

The Prime Minister moved a motion seconded by the Deputy Prime Minister to remove Fepuleai as President of the Lands and Titles Court under S65(8) of the Constitution which states that a two thirds majority vote of the Legislative Assembly is required to remove a Judge for misbehaviour.

Before the vote Deputy Prime Minister Hon Fiame Naomi Mataafa stood to reject the report by the Parliamentary Special Committee presented by Chairman Nafoitoa Talaimanu Keti recommending that Fepuleai not be removed.

“Members have been given the freedom to exercise a conscience vote, but the motion before Parliament today is a Government motion, and who is the Government?” Fiame asked rhetorically.

“It includes the Office of the Attorney General and the Samoa Police Service,” said Fiame referring to the work done by Police and the AGs office to charge and prosecute the matter against Fepuleai.

“It includes all of us here, Ministers and Associate Ministers,”

Fiame set out reasons for her strong objections and non-acceptance of the Committee’s report and was disrupted several times by firstly Leailepule Rimoni Aiafi, and then Nafoitoa as the Chair of the Special Committee, as well as the Speaker of the House Toleafoa Faafisi.

The Deputy Prime Minister continued to detail her reasons for rejecting the Committee’s recommendation, noting the key areas of concern as: Parliament setting precedence in applying special treatment to convicted Judges and Parliament sending the wrong message to the people.

“I reject this report on the basis that it says: the criminal acts committed by the President were not done in relation to the performance of his work as a Judge;

“The question is, Mr Speaker, if the night watchman’s head had been hammered and he had died..? Would this House of Parliament still want him to stay on?”

“Because the truth is, it will be questioned.., is this House of Parliament saying that judges are allowed to commit murder, rape, burglary and other crimes..?

“..because that judge did not commit the crime within the context of carrying out his duties as a judge?!”

The Deputy Prime Minister said that the second reason for her strong objection is that the Committee’s report places the decision of a lower Court as more binding than that which has been laid down by the Court of Appeal.

“As a Member of Parliament, I am shocked that a Parliamentary Committee would bring a decision of a lower Court as a basis of its decision, when the highest court, the Court of Appeal, has handed down a decision;

“Once the Court of Appeal hands down a decision, it disregards any and all decisions of the lower Courts”.

Fiame told the Legislative Assembly that if the House of Parliament takes decisions of lower Courts over the Court of Appeal, then they would be doing a great injustice to the peace and security of the nation.

Lealailepule stood to defend the Committee’s report saying that it did also make mention of the Court of Appeal.

This was followed by a clarification by Nafoitoa to say that their Committee’s recommendation did take into account the Court of Appeal decision.

The Deputy Prime Minister continued, highlighting reasons for her non-acceptance of the Special Committee’s position that their recommendation did not affect Section 15 of the Constitution, that “All persons are equal before the law and entitled to equal protection under the law“.

Fiame spoke sternly to reject the view of the Special Committee that there has been no special treatment in their recommendation to reinstate Fepuleai, making reference to the various views given by Members of Parliament who had spoken up in support of Fepuleai by highlighting his years of service, hard work and valuable contribution to both the Legislative Assembly and the LTC.

“Mr Speaker, how can we say that we have not afforded special treatment to Fepuleai when we’ve heard the views here today?;

“So what does that mean? That because it is a person who served us here in Parliament, then we should give him our support, and give him a chance? That he is different from anyone else seeking justice in a Court of Law?”

Composed, the Deputy Prime Minister spoke passionately about the consequences of Parliament disregarding section 15 if the recommendation of the Committee is upheld.

“Mr Speaker, we have trampled upon Section 15 of the Constitution because we have taken other factors into consideration to stop us from imposing the usual consequences upon someone convicted of such a crime”, said Fiame.

Fiame reminded the Legislative Assembly that the suspended LTC judge was convicted of grievous bodily harm and that their decision would also be consequential on convictions of this type.

“Mr Speaker our response today is also this House’s response to this type of conviction;

“How do we compare this to those who are given 7 years imprisonment for this type of conviction;

“What is the Parliament of Samoa saying? that if the President hits someone on the head, that it is allowed?”.

“That is the message, Mr Speaker,  that we would be sending, if we follow the report of this Committee.”

Fiame said that the wording of the report purports to justify the actions of Fepuleai.

“What message will be sending?” said Fiame.

“That is it OK for a member of this House, to hit somebody on the head?”

“Because Mr Speaker, that is the message we will be sending if we follow the recommendation of this committee”.

The Deputy Prime Minister reminded her fellow Parliamentarians that if one of them were convicted of a crime that carried a maximum penalty of 4 years or more, then they would be automatically removed as an MP.

Finally Fiame reminded the Committee that Fepuleai had signed an affidavit during the hearing of his matter before the Court of Appeal, that if a conviction was confirmed, he would resign.

“Did you consider that Fepulea’i has committed perjury?”

The Chair of the Committee stood to confirm that their committee had not seen such an affidavit to which Fonotoe Pierre Meredith, also a lawyer by profession stood to support Fiame, and refer Parliament to the Court of Appeal decision that mentions the affidavit.

Members of Parliament who voted to support the motion to remove the LTC President under s68(5) due to misbehaviour as confirmed by a conviction by the Court of Appeal:

Members of Parliament who voted to reject the motion, and support the LTC President returning to continue his duties as a Judge:

MEMBERS OF THE PARLIAMENTARY SPECIAL COMMITTEE