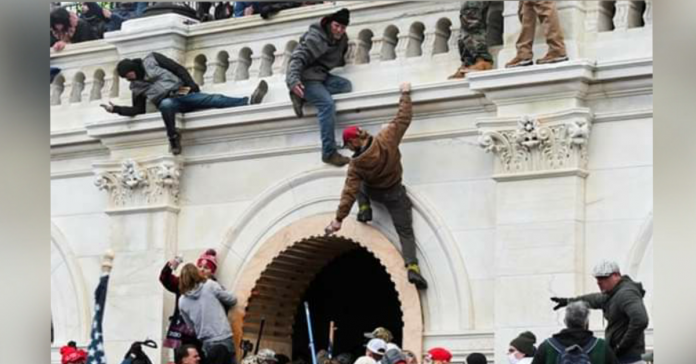 The capital of the USA has been under an imposed curfew since 6pm local time, following a breach of the Capitol by a crowd of thousands of pro-Trump demonstrators. 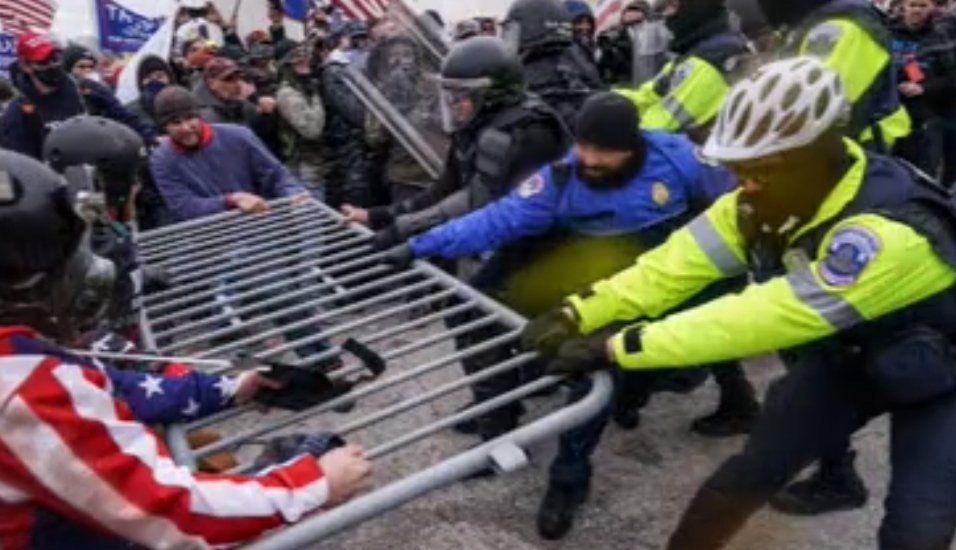 The protesters turned into rioters as a mob was able to breach security and successfully enter the Capitol building; leaving one woman dead and Senators in session ducking for cover.

Security services moved to evacuate Senators as pipe bombs were reported in nearby buildings.

Security were seen drawing their weapons as the crowd attempted to force its
way into the Chamber.

Trump is reported to have encouraged rioters hours beforehand through public statements and tweets which have since been blocked and removed by Twitter and Facebook.

The Senators were scheduled to go into session to confirm the certification of the tabled results of the 2020 Presidential election, declaring President Elect Joe Biden, the winner.

The results have been formally certified by the USA Electoral College, confirmed after the US Judiciary at all levels rejected 62 legal challenges against the voting results from the Trump campaign. The acceptance of the results is a formality for the US Senators to acknowledge the election results.

President Trump had issued a challenge to his Vice President, Mike Pence, who Chairs the Senate; to use this opportunity to dispute the election results.
The Vice President publicly declared in response, that after a full evaluation of his role, he is clear that he has no such right of challenge.

It is reported that the breach by protestors of the Capitol follows a rally led by President Trump and his supporters, where he continued to declare the election stolen. 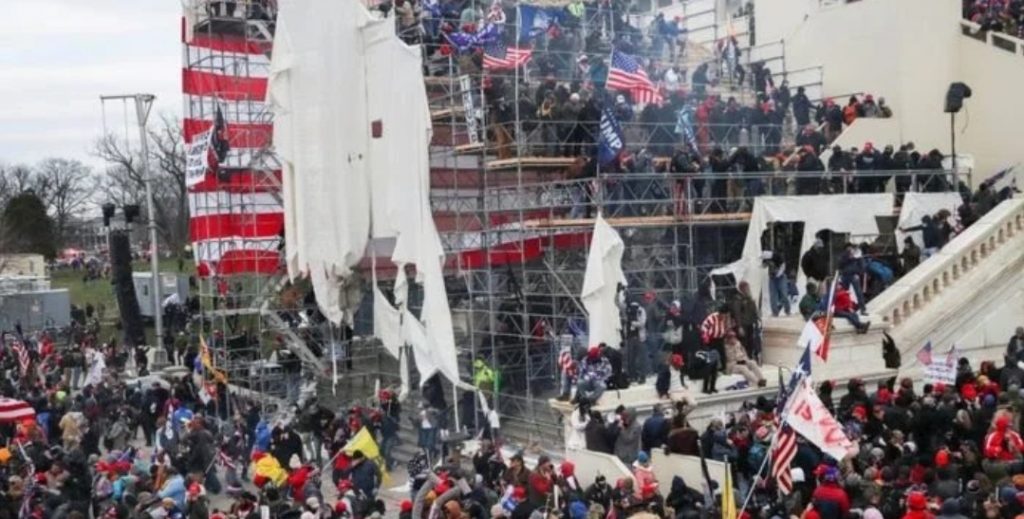 In the House when security was breached by the protesters, the Vice President was evacuated along with Senators and those who were in the public gallery.

At the height of the breach, President Elect Joe Biden publicly called on President Trump to tell his supporters to stop their actions.

The President following that, made a public statement still insisting that confirming that the election was stolen, but that the supporters needed to stop and assist law enforcement officials.

After waiting for calm, the Senators have since gone back into session to complete their task, with Vice President re-opening the Session saying, “Those who wreaked havoc in our Capitol today, you did not win”.

Senators returned to the Capitol under heavy guard, carrying with them the certificates of electoral votes that were rescued from rioters who broke into the chamber.

House Speaker Nancy Pelosi vowed to resume the interrupted proceedings and Senate Majority Leader Mitch McConnell said after returning to the Senate, “The United States and the United States Congress have faced down much greater threats than the unhinged crowd we saw today. We’ve never been deterred before. And we’ll not be deterred today. They tried to disrupt our democracy. They failed”.

“This failed insurrection only underscores how crucial the task before us is for our republic.”

In a public statement, former Republican President George W Bush said, “Laura and I are watching the scenes of mayhem unfolding at the seat of our Nation’s government in disbelief and dismay. It is a sickening and heartbreaking sight. This is how election results are disputed in a banana republic — not our democratic republic.”

World leaders have responded calling for a peaceful transition of power, describing the day’s events an “attack on democracy”.

From New Zealand, Prime Minister Jacinda Ardern, tweeted that “democracy – the right of people to exercise a vote, have their voice heard and then have that decision upheld peacefully – should never be undone by a mob”.

Australian Prime Minister Scott Morrison condemned the “distressing scenes” and said he looked forward to a peaceful transfer of power. 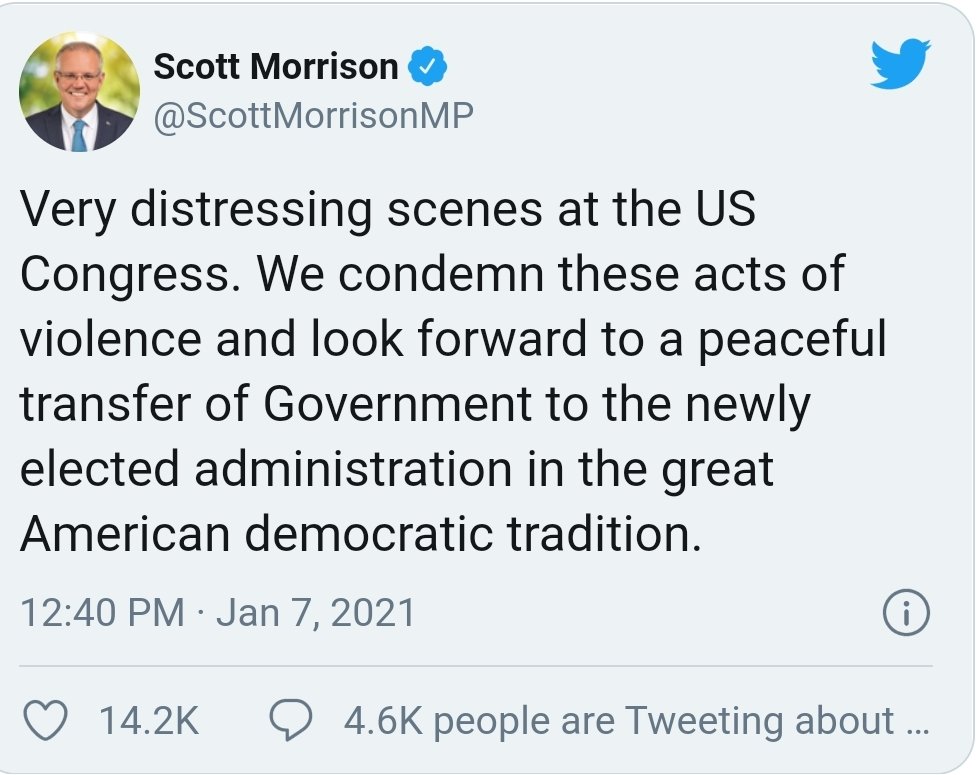 “Violence will never succeed in overruling the will of the people. Democracy in the US must be upheld – and it will be,” he wrote on Twitter.

“The United States stands for democracy around the world and it is now vital that there should be a peaceful and orderly transfer of power,” he wrote on Twitter.

Scotland’s First Minister Nicola Sturgeon tweeted that the scenes from the Capitol were “utterly horrifying”. 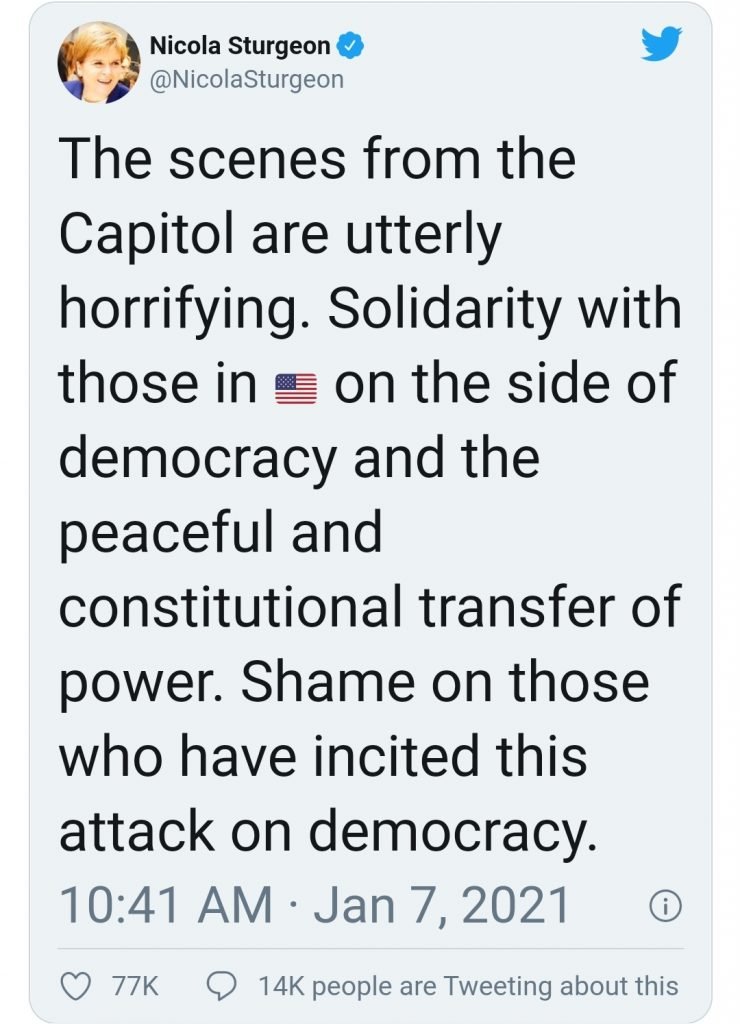