Counsels for the petitioner Alex Sua aided by Afoa Fetu Lagaaia, were forced to apply to the Court for warrants of arrest against their own witnesses, when it became clear that witnesses were being sabotaged and pressured to not turn up to Court.

Justice Lesatele Rapi Vaai on behalf of the two-judge panel with Justice Fepuleai Ameperosa Roma granted arrest warrants for three witnesses called in the morning and two who also did not appear in the afternoon to give evidence for Toomata Norah’s case against Fonotoe.

The petition may come under threat as the Court warned that the case would continue Friday morning regardless.

“If these witnesses do not turn up tomorrow, the case will still proceed without them,” counsels were told by Justice Lesatele Rapi Vaai.

One witness, a young man who was waiting outside Court to give evidence was seen being taken away by his father, who had come to tell him to return home and not give evidence.

Samoa’s Crimes Act 2013 states that it is a contempt of court for anyone who “assaults, threatens, intimidates, or wilfully insults… any witness, during his or her sitting or attendance in court, or in going to or returning from the court”.

A former Deputy Prime Minister of Samoa, Fonotoe polled 341 votes more than Toomata Norah Leota who had 780 votes to Fonotoe’s 1121 at the April 9th general election. Samoa’s Electoral Act requires a candidate to achieve half of the elected member’s votes, to be able to bring an electoral petition against them.

As a woman candidate who was unsuccessful at the general election, Toomata’s votes represent 35.35% of the total 2,200 votes casted for Anoamaa 1 constituency, second to Aliimalemanu Alofa Tuuau who achieved over 40% of total votes. 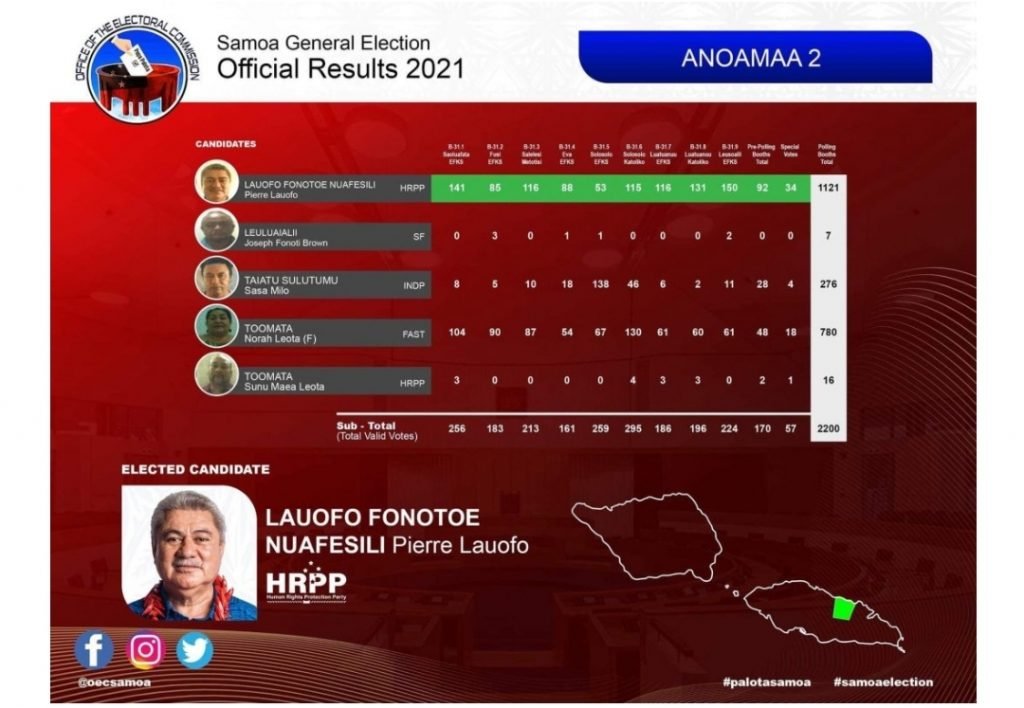 The petition and counter-petition continues in Court today (Friday).

The Court has passed the halfway mark of the 28 electoral petitions filed after the general election – an even split of 14 against each of the political parties at the centre of Samoa’s ongoing political crisis, now going on to four months. So far, two HRPP candidates have had their seats declared void, while another three have offered to resign in out-of-court negotiations to have petitions against them withdrawn. That now leaves the official count of the April 9th general election at FAST 26 vs HRPP 20.