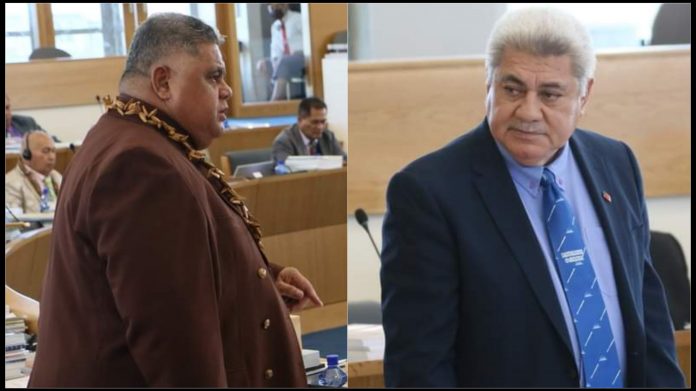 The incident emerged when the Speaker of the House, Papalii Lio Oloipola Taeu Masipau announced that he was saddened and gravely affected by public comments made against him by HRPP opposition leader Tuilaepa Sailele Malielegaoi.

“A senior Member of Parliament should not make false and misleading accusations without basis,” said the Speaker.

Papalii Lio told Parliament that he has forgiven Tuilaepa, but believes the comments made at a press conference and publicly aired on Facebook aimed to ruin his reputation and bring disrepute to his good name.

In response Fonotoe said that while he sympathised with the Speaker, Tuilaepa was not in Parliament to respond. Fonotoe then tells the Speaker that the best solution was to bring him back so the matter can be discussed face to face.

“That is the culture,” added Fonote.

This angered the Minister of Agriculture and Fisheries who stood to express his disappointment in Fonotoe for not apologising to the Speaker on behalf of their leader.

Laauli addressed Fonotoe directly, and told him he had no right to tell the Speaker what to do.

“How can they be brought back when they’ve broken the law?” Laaulialemalietoa yelled at Fonotoe across the Parliament floor.

Laaulialemalietoa told Fonotoe he was disrespecting the Speaker by telling him that the solution was with him, and condemned the suggestion that Tuilaepa and Lealailepule were brought back. “What part of the culture is that?”

Fonotoe yelled back that there was nothing offensive about what he had said to the Speaker but this only agitated Laauli even further.

“Seu le manu ae tagai le galu” yelled Laaulialemalietoa. A proverb that warns the tautai fisherman to be cautious about the waves when he sets out on the reef to catch a type of seagull that is used for bait.

Fonote, seemingly unable to come up with his own proverb to respond, also yells back to Laauli, “Seu le manu ae tagai le galu.”

The Speaker helped turn down the heat and closed the discussion by again stating he has forgiven Tuilaepa, and told Fonotoe that the suspension of the HRPP Leader and Secretary, was a whole of Parliament decision, and not his alone.

Parliament suspended Tuilaepa and Lealailepule without pay, and for an indefinite period of time.

A Supreme Court hearing was held earlier this month to consider applications by Tuilaepa and Lealailepule, asking the Court to find their suspensions unlawful and unconstitutional. The Supreme Court decision is pending.