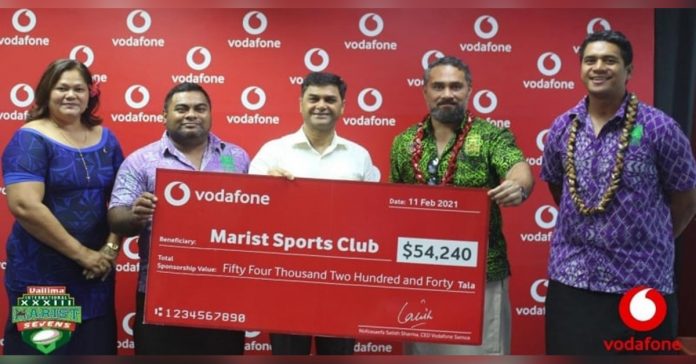 The Marist St. Josephs Club Samoa is pleased to announce Vodafone Samoa as a Gold Sponsor for the upcoming Marist Sports Season.

The President of the Marist Sports Club, Faimalomatumua Matthew Lemisio made the announcement yesterday at the signing ceremony between the Vodafone Samoa and Marist.

“I would like to thank the Nofoasaefa Satish Sharma and Vodafone family for this kind donation. Your assistance allows Marist to provide an International platform to the development of sports in Samoa. Thank you for believing in our vision and lending your shoulder to help us through the preparations for the Marist Sports Season.”

Vodafone Samoa Ltd is one of the country’s leading telecommunications company, located in the heart of Apia. They recently celebrated their 100 Sites milestone and continue to strive towards their vision, ‘To enrich their customer’s lives through the unique power of mobile communication.’

“Marist have been a great supporter of Vodafone Samoa and have been a great platform for us to give back to our community, Samoa. Our relationship started from when we partnered with the Marist Brothers Old Pupils association and has only grown to greater heights such as now with the Marist St Joseph’s Sports Club.” Says Vodafone Samoa CEO – Nofoasaefa Satish Sharma.

Vodafone have been avid supporters of the Marist Brothers Old Pupil Association (MBOPA)since 2019. This partnership saw Vodafone (then Bluesky) attend MBOPA’s 69th Anniversary Celebrations in New Zealand, and again in 2020 where Vodafone became the naming sponsor for MBOPA’s 70th Anniversary held in Samoa.

This year, Vodafone is again offering its generous support towards the Marist brand by partnering with the Marist Sports Club.

“With this agreement, I can gladly say on behalf of Vodafone that we are committed to Marist Sports Club and its sporting initiatives. Thank you for giving us a platform to continue to help grow local sporting talents in Samoa. We believe that the future is only going to be brighter and we encourage the public to join Vodafone -Samoa’s leading Telecommunication Company and support Vodafone as Vodafone supports you. Faafetai Tele Lava” Concluded Vodafone Samoa CEO – Nofoasaefa Satish Sharma.

The sponsorship deal is valued at ST$54,240 and it marks yet another wonderful partnership between the two entities. Five different sports including netball will be staged throughout the season which runs from February to June.

The Marist Sports Season will kick-off the 33rd Marist Sevens Tournament on the 26 – 27 February at the Apia Park Stadium.