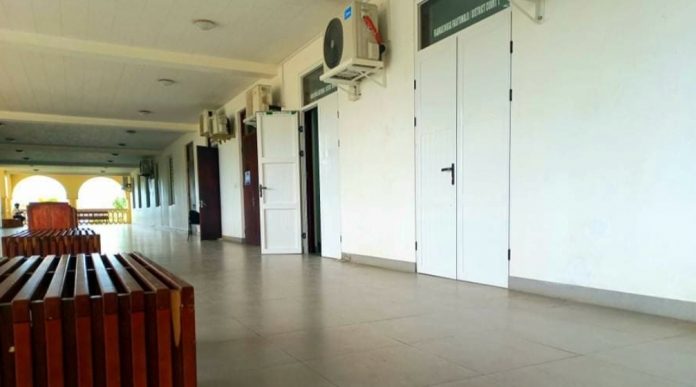 Matai and untitled men of Lotoso’a Saleimoa charged by police for ordering that a man be tied up by his arms and legs in an animal-like position, appeared in the District Court to face charges against them.

Members of the Village Council, including village youth who actioned the orders were released on bail without plea. The charges against them had not been finalised according to Prosecutors of the Attorney General’s office.

The incident happened in July when the victim was allegedly restrained and brought before the Village Council (Alii ma Faipule) for his sons’ disobedience to chiefs’ orders.  The young men had been seen in the village, ignoring a Village Council banishment against them.

Aupaau told SGN at the time that the victim was then tied up by his feet and hands, and left lying in a fetal position on the ground in the village malae. A source from the village says the man was only released when a Lotoso’a Church Minister intervened.

“The faifeau had to kneel before the Village Council and plead with them to have him released”.

Deputy Police Commissioner Auapaau says Village Councils must ensure the punishments they lay down are within the boundaries of people’s rights under the Constitution and the Law.

“This is a good reminder for Village Councils to understand that this type of action is against the law..

“It doesn’t matter if 100 per cent of matai in your Village Council agree to it, you all have to obey and abide by the Law,” Auapa’au said.

In response to other incidents where village matai and taulelea have been arrested and charged for carrying out illegal acts, Police Minister Faualo Tauiliili Harry Schuster told Samoa Global News village matai are not above the law and they ought to use their authority as Alii and Faipule to uphold the Law.

“Let us not use our power as Village Councils to allow illegal acts and then protect those involved from facing the consequences,” said Faualo.

All 15 accused will appear again the District Court next week, where they are expected to enter pleas.