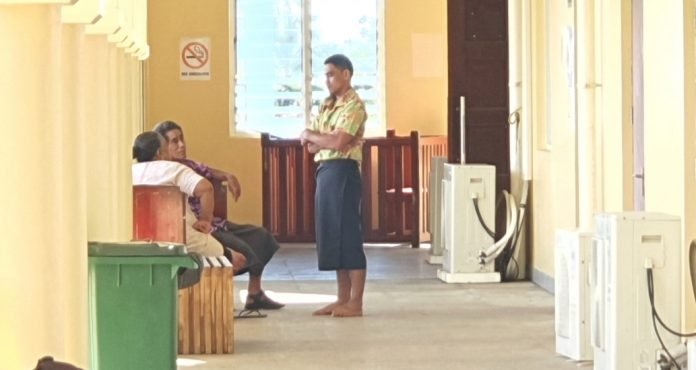 A school girl took the stand in the Supreme Court of Samoa yesterday afternoon to give evidence against a teacher charged with her alleged rape in April last year.

The Year 12 student was 16 years old at the time of the alleged incident.

In tears, she told the Court that she could not fight the defendant despite her pleas for him to stop.

Instead he pleaded with her to give him a chance, as he held her down and forced himself onto her, according to the victim.

Asked by counsel what she was doing while the alleged rape was taking place, she said she was holding on to her t-shirt the defendant was trying to pull off.

“When he saw me crying, that’s when he stopped. He got off me, and told me he was sorry”, said the victim.

The incident happened when schools were closed due to the State of Emergency lockdown period on the 6th of April 2020.

The victim and the defendant had been at a study session held in the home of another student, located far inland. The victim and her teacher were then dropped off near the home of the School Vice Principal, so he could drive them home.

Paulo Ieremia has pleaded not guilty to one count of rape. He had been teaching Years 9&10 in the Upolu high school for four years prior to the incident, and also helped out with Biology for the senior class where the victim was a student.

Represented by Unasa Iuni Sapolu, the defense is trying to establish that there had been an alleged relationship between the victim and the accused. The victim is denying such a relationship with her teacher.

Prosecution witnesses included lead Officer in Charge (OIC) of the investigation, Constable Mary Lave who says any alleged relationship even if it were true, between the accused and the victim is irrelevant.

“Rape is rape, and the power dynamic of the relationship between a teacher and his student lies with the teacher acting inappropriately”, she said.

Seven prosecution witnesses were called yesterday morning including the School Principal, a female teacher and the doctor who assessed the victim in May 2020.

The School Principal was the first person the victim felt comfortable to report the incident to.

The Court heard that the School Principal, however, did not act until several weeks later.

Asked by Prosecution why she did not tell her parents straight away, the victim said she was afraid of her father.

“Why didn’t you tell your parents first?”, asked the Prosecution.

“Because my father is abusive,”

When the parents of the victim eventually learned of the alleged rape, the father gave his daughter a beating before they took her to the police station to report the incident.

The Court heard that the victim had a black eye and bruises on her body from her father’s reactive beating.

The hearing took a break after 5pm yesterday afternoon to resume this morning where defense counsel is expected to call three witnesses including two students and the defendant.

This is a developing story. The panel of five assessors is expected to hand down their verdict later today.

Note: Name suppression does not apply to the defendant.