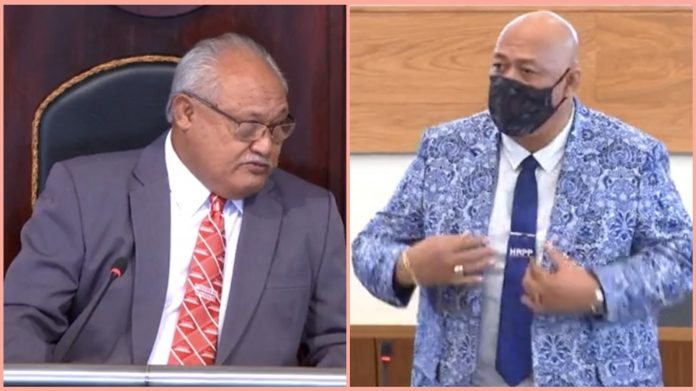 Monday 31 January 2022, Apia Samoa.  Veteran Member of Parliament Lealailepule Rimoni Aiafi has copped a 24 hour suspension from Samoa’s Parliament for allegedly violating standing orders through public comments against the Speaker of the House, and on matters currently before the Courts.

Speaker of the House Hon Lio Papalii Taeu Masipau opened Parliament this morning by raising concerns over what he says are public statements by Lealailepule that falsely accuse and defame him, as the Speaker of Samoa’s Legislative Assembly.

The Speaker claimed Lealailepule had publicly commented on the issue of additional women MPs, when that particular matter is currently before the Courts. “Our standing orders prohibit us from discussing any issues that are before the Court, as that would impact on the rights of those who are parties to Court matters,” stated the Speaker.

“My disappointment is with false accusations made towards the Chair, that can negatively influence the public and the world who are watching,” said Papalii. He added that it was not his person, but the Speaker of Samoa’s Legislative Assembly, that he is focused on protecting.

The second issue Lealailepule is accused of publicly addressing, is the controversy around the emergence of different versions of the Constitution Amendment Act 2020, and the Lands and Titles Act 2020. The Speaker made a special announcement on the morning of January 18th, revealing that findings of an internal investigation conducted by the Office of the Legislative Assembly, would be tabled in Parliament once the Supplementary Budget was passed.  The Speaker then forbade any discussions from the floor on the matter, until the report, still yet to be tabled, is open for formal discussion.

This morning, the Speaker says Lealailepule publicly accused FAST of being behind the different versions of the Acts emerging, as a way to put blame on HRPP.

Member of Parliament for Falealili 1, Toelupe Poumulinuku Onesemo then stood to put forward a motion that the 16 year veteran MP be stood down from Parliament for a 24 hour period. The Minister of Communications and Information Technology put forward the motion under Standing Orders 65(4) and 92(4). The latter being a section that does not allow amendments to a motion, nor any discussion before voting.

The Speaker put the question to the floor and received a resounding, “ioe” followed by an equally loud “leai” by Lealailepule, whose request for an opportunity to speak before heading out, was rejected by the Speaker.

Lealailepule said HRPP were also facing false accusations through public comments. He said if he’d stayed in Parliament today, he would have asked for clarification of two important areas that HRPP are being accused of.

“I’d have asked the Finance Committee if there were any illegal dealings relatint to the use of funds while we were in power,.. and secondly I would like to ask for any evidence that HRPP had sold customary lands”.

Lealailepule was first elected to Parliament at the 2006 Samoa general elections, representing then Faleata West (Faleata i Sisifo) as an independent.  In March 2010, Lealailepule was deemed to have resigned from Parliament under anti-party-hopping laws after refusing to deny his support for Tatua Samoa. He was defeated in the resulting by-election but was re-elected into Parliament a few months later, at the 2001 general elections, and appointed the Tautua Party’s whip. In February 2016 he announced that he was leaving the Tautua Samoa party and would run as an HRPP candidate in the 2016 election. He was again successfully re-elected, and appointed Associate Minister of Communications. For the 2021 general election, Lealailepule was unopposed.