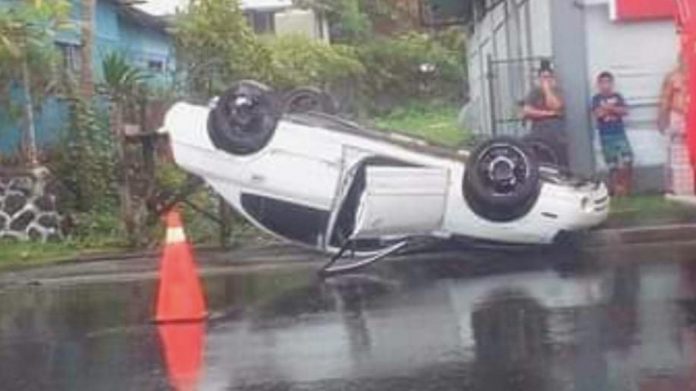 The driver of a white sedan involved in a colission on the four-lane stretch of road at Lalovaea infront of J&F Materials, was taken to hospital for treatment.

An eye witness and employee of J&F told Samoa Global News the second vehicle, a black 4-door, did not stop when the white car bumped it.  “It just kept going”.

The J&F employee said the driver of the white car was a male. “He was rushed to the hospital as he sustained a few injuries from the crash”.

The white sedan bumped the back of the black car, causing it to catapult into the air. It flips over before it lands upside down on the footpath.

At press time, police say the driver of the black car had not yet come in to report the incident.  SGN arrived at the scene while FESA first responders and Samoa Police were clearing the busy road and directing traffic.

Samoa Police have issued a warning through their Christmas message for drivers to be careful on the roads over the festive season.

“We call on Samoa to take extra care on the roads during the festive season, to avoid any tragic accidents,” said Deputy Commissioner Auapaau Logoitino Filipo. “Please don’t drink and drive, remember to put on your seat belts, and ensure children ride safely in vehicles at all times”.