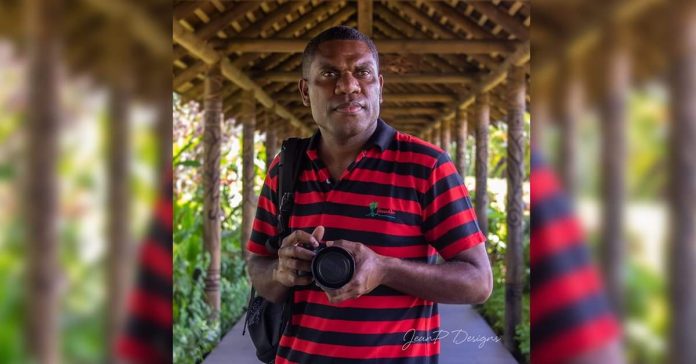 Jean Pierre says that the first person who taught him to use a camera was Bryce King from Perth, an Australia who was in Port Vila in 2003.

“I was following him around and he showed how to use a video camera to record images. He was working as an Australia Volunteer at the time. When he left in 2004 he gave me a tripod. I didn’t have a camera to use with that tripod but he said I would need it one day…”

“Especially taking photos that tells a story like photo journalists do and also a video producer;

“Currently, I am working as a Media Production officer for a church organization in Vanuatu and I also do videos for other NGO’s in Vanuatu in my free time.”

The 37 year old is from Botovro Village, North of Malekula Island, the second largest island of the 83 islands of Vanuatu.

John Pierre says that it is important to share Pacific stories through pictures and videos and his passion comes through as he shares.

“We have the skills and technology with internet to create and share our stories. I love creating vides, particularly social media videos that speaks on issues in my country – issues on family, climate change and agriculture.”

“My musical video “Taetem Strap” based on family won the first prize and that was a milestone for me in my filmmaking carrier.”

“I learnt that there is always a story to tell. We also learnt how to take better pictures that will strengthen my story telling;

“And I am now more focused on Agriculture stories. After all that’s what we are surrounded with, land and nature and it’s our way of life from past generations.”

John Pierre says that he wants to make the Agriculture sector and activities like farming and gardening more attractive to our youth.

“I want to teach our youth that farming is better than than sitting in an office”.

For the futture John Pierre would like to continue with video and photography and have his own blog for exposure of his work.

“I also love drawing portraits and I think in the future I want to be a good portrait artist”.

John Pierre Niptik has come on board as a guest columnist of Samoa Global News during his time here in Samoa.