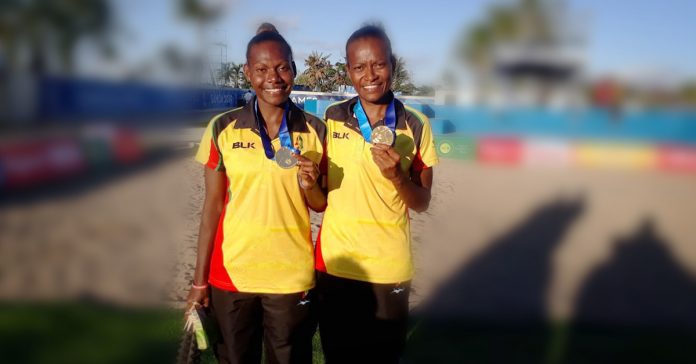 The duo played edged out American Samoa in the semi finals to secure a place in the finals against Tahiti.

Sherysynand Miller could not hold back tears when speaking to Samoa Global News after winning their gold medal.

Sherysyn said that they knew it was going to be a tough competition with all other Pacific nations aiming to win Gold.

“We put in our 200 percent performance;

“We were thinking of our families especially our parents back home who are cheering and praying for us;

“The thought of them helps us a lot in getting this medal;

“This is for our parents and their prayers and support for us.”

Miller talked about how they practised twice a day, 7 days a week including Sundays aiming for nothing else but Gold.

She said they had to camp a month before they flew over to Samoa to ensure they were on top of their trainings.

Miller Pata said there were a lot of sacrifices while preparing for the games but as they stood on the podium waiting to receive their gold medals all those feelings disappeared, repalced with joy and a thankful heart.

Speaking of their time to practice together Miller says that as a USP student at the Vanuatu Campus, Shersyn had to juggle studies, exams and training.

“It was a challenge for the both of us, especially my sister here, I can’t imagine having to find the time for practice and studies. I know I wouldn’t be able to do it,” she said.

Sherysyn said it was a challenge she had to overcome because she was determined to do well in her sport.

“Despite having to balance the time to practice and my studies, wearing this gold medal around my neck tells me that it was all worth it,” she said.

“I am just thankful because I had the support of my family, my coach and also my sister here so it was okay and it was nothing I could not handle.”

The Gold Medalists and the Vanuatu Beach Volleyball team will head back to Vanuatu on Monday.