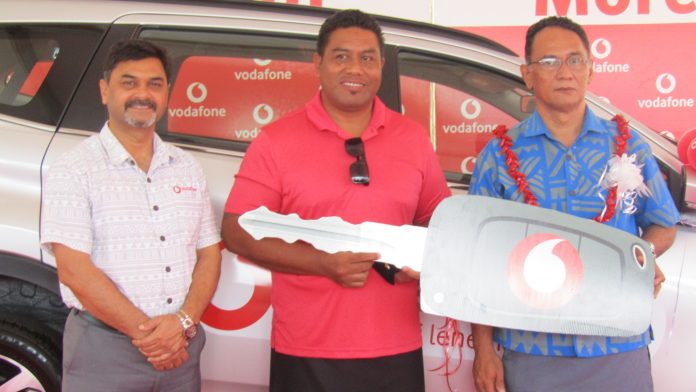 A farmer and father of four has won a brand new Vodafone Toyota Rush this morning!

Leefu Pule of Vaivase-Tai and Fasito’o-Uta says this is such a blessing for his family and especially his four children.

“I can’t thank Vodafone enough for this great blessing.. I’ve been a customer for over 20 years and I’ve had the same number this whole time,” Mr Pule said.

When he first registered as a customer of Vodafone the company was called Samoa Tel at the time.

Mr Pule told Samoa Global News that he’s had the same phone number from the beginning and he believes that this number was a blessing that has led him to win a brand new car.

The farmer says he has an old car but the new Toyota Rush will assist him a lot for going to his plantation every day along with his other family responsibilities and commitments.

When asked how much he spent on his entries in the ‘More for All’ giveaway promotion, Leefu Pule said he lost count of the entries he has made throughout the promotion.

The happy winner said he spends nearly $50 tala a week on credit and believes that this is his reward for participating in the various promotions.

The five selected winners were all given the chance to pick a number from 1-5 and the sequence was also used for these selected participants to pick any key from a set of 20 pouches.

Contestants all went through two rounds but none of them had picked the right key to the Toyota Rush.

Mr Pule was the third contestant and he finally managed to pick the right pouch, placed on the board as his lucky number 8.

He reached in and took out the correct key that unlocked his brand new car.

“I couldn’t believe it when I finally inserted the key and it was the right one after two rounds!” he said excitedly.

“I will make sure to use this vehicle with care because this luck is rarely available,” he said.

“Thank you Vodafone for always being the best in terms of promotions and mobile services in Samoa.” he added