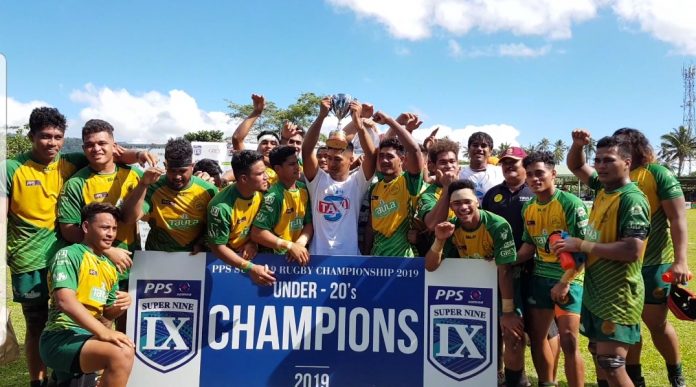 22 June 2019, Apia Samoa. The Vaimauga Eels Under 20s have taken the PPS Super 9 Championship Cup after a tough match against the Navigators representing Safata and Lefaga.

Both teams conceded a penalty each in the first half levelling the scores at 3-3. The Eels scored a try to in the 30th minute, taking the score to 8-3.

The Navigators missed a penalty infront of the goal post just before the half time hooter that would prove critical for them.

The second half was nail biting for supporters and fans, but the score remained at 8-3 despite many opportunities for both sides to put points on the board, a testament to the gruesome defense by the youngsters of both teams.

The Most Valuable Player of the Tournament went to Eels lineout jumper Miracle Failagi of Vailele Club.

“He’s a strong player, who has been an excellent line-out jumper for us. His defense and explosive running has made him a key contributor to the side throughout the whole season”.

Under 20s Eels head coach Pola Vaimasenuu Chris Faaofo said that it was a tough match and credited the Navigators for putting up a good fight.

Back at the team barracks, the Coach and Management gave the traditional speeches and reminded players of God’s guiding hand on them throughout the season.

The head coach announced the team call for a toanai tomorrow.

The manager of Eels Under 20s thanked the parents for their support and sacrifices made throughout the season.

He also announced the team allowances to be distributed later at the Club function which was well received with excited clapping and jeering.

Lagi Laki and her daughter Mary came to support Feepo Petelo, the 18 year old hooker for the Eels who plays his club rugby with Moataa.

Her husband Laki Petelo works at Plumbtech and she says that Feepo has also secured a job there.

“My husband is at work and he doesn’t get off work until 3pm so that’s why he could not be here.”

“We support my son’s rugby and hope that one day, he can play for Manu Samoa,” said Feepo’s number 1 fan.