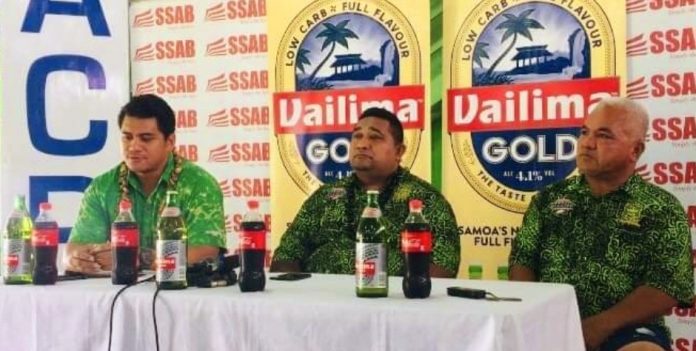 The Marist St Joseph’s Sports Club have announced that their annual Vailima sponsored rugby 7’s tournament will push through this year, scheduled for the last weekend of March, despite the challenges of the global pandemic.

Club President Pouniu Peter Schmidt said the impacts of Covid-19 on local sports is the very reason they’ve decided to go ahead with the annual tournament, now in it’s 34th year.

“It’s important to keep players interested and give clubs a purpose by providing quality competitive tournaments such as the Vailima Marist 7s.

“Many events have been disrupted and that can be hard on players.. but there’s a risk that our youth will lose interest in sports as the pandemic prolongs.. so that’s the main reason our committee have  decided to go ahead..

“It will lift the spirits of players, and be a platform to showcase the best of local talent.”

President Pouniu said they are particularly grateful to the ongoing support of the Samoa Breweries and thanked Vailima for once again stepping in as naming sponsors of the event.

First launched in 1988, the annual tournament was the first international 7s in the world, even before Hong Kong became a global event.

“It attracted high profile players from overseas such as Michael Jones who regularly featured for Moataa.. that was in the pre-rugby professionalism era,” said Vice President Galumalemana Rudolf Moors. “Before rugby turned professional in 1996…”

Tournament Director Taupau Alex Mikaele confirmed the tournament, now scheduled for 25-26 March 2022, will feature the top teams from across Samoa, vying for the Tupua Fred Wetzell Championahip Cup, and the Cynthia Wetzell runner’s up shield, both sponsored by Apia Concrete Products.

Top 8 teams from last year, with the 8 remaining teams selected from amongst the best performers of the recent Vodafone National Sevens series.

Defending Champions Laulii Lions will be looking regain their title and back to back National 7s Champions, Tepatasi from Aleipata are seeded second followed by Moataa who have been in development mode in recent years. The dangerous pack from Savaii, Tama Uli is seeded 4th place for the Vailima Marist 7s.

BBE Vaiala, who won two tournaments in the recent national 7s series and took out the 32nd Vailima Marist International Sevens tournament will be seeded 5th while hosts Marist St Joseph’s are 6th.

SCB Maroons are placed 7th from last year’s performance and from the Big Island – Lupesiliva from Sapapalii make up the top 8 spots.

The Vailima Marist 7’s tournament aims to identify new rugby talent for both men and women, prepare players for international representation and promote social stability through the empowerment of youth and women.

The women’s competition now in it’s 5th consecutive year has six registered teams. The Apia Maroons will be looking to end their dominance of the 7’s season with a Marist 7’s win.

Tepatasi, No Idea and Strikers have consistently perforned at local 7s events and will no doubt put their hand up for a chance at the women’s championship cup.

La Oso and Mulifanua Jetz will also be featuring teams at next month’s tournament.