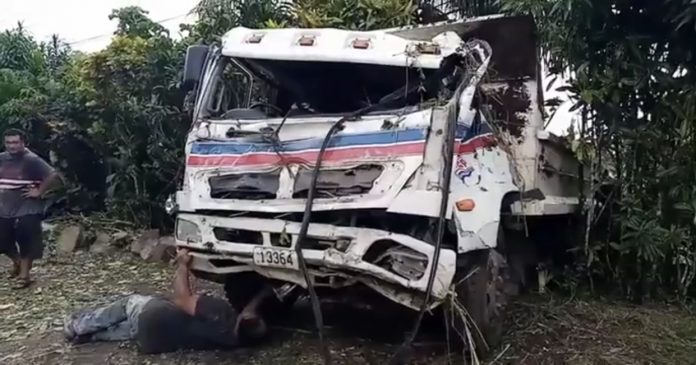 Thursday May 2022 Apia Samoa. The driver and passenger of a truck escaped the wreckage with no serious injuries after the vehicle they’d been travelling in lost control and veered off the road. The single car accident took down an electricity pole at just after 1:30pm this afternoon.

Miraculously noone was injured when the Apia Concrete Products truck lost control at Vailima, as it came downhill towards to Apia.

A witness who arrived at the scene shortly after the accident and took video footage of the wreckage, said the truck had travelled approximately 50 metres before it came to a stop infront a family’s fence (pā aute).

According to WT Media’s Kitiona Utuva who captured a live video of the scene and wreckage.. the incident took place at a bend on the main road, not far down from the EFKS Vailima Church.

The truck was heading downhill towards Apia, but the driver ha lost control of the vehicle, said Kitiona.

“The truck veered off the road and I could see 2 poles lying on the ground,” said the witness.

Fire and Emergency Services Authority Commissioner, Tanuvasa Petone Mauga said the FESA first response team and ambulance arrived at the scene after they had received the 911 call for assistance.

Tanuvasa confirmed there were no fatalities, nor was anyone badly hurt. “Only the driver had a few injuries but not serious..”