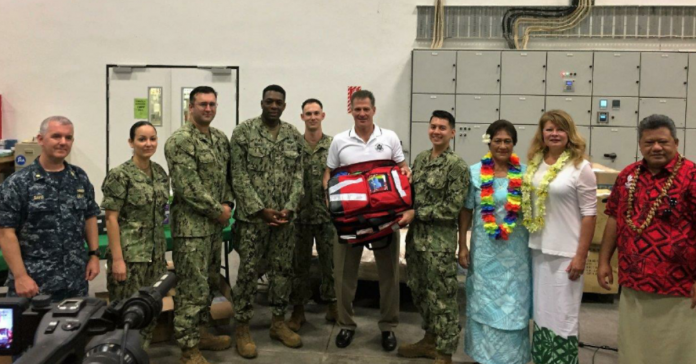 A handover ceremony took place Wednesday morning between the Ministry of Health and the U.S. Embassy to acknowledge recent support the United States Government has provided Samoa.

A 6-person team of U.S. Navy medical personnel will be working alongside Samoa’s nurses and doctors at the National Hospital the first two weeks of July to augment local capacity.

This medical exchange involves the donation of over $130,000 tala worth of medical equipment:

U.S. Ambassador to Samoa, Scott Brown, formally presented this equipment to the Minister of Health, Faimalotoa Kika Stowers stating, “It is our hope that this support is useful in accomplishing the Ministry’s objectives over the coming weeks and we look forward to further collaboration to help Samoa achieve its health goals.”

Ambassador Brown further thanked the New Zealand Defense Force as many of the larger items were delivered in an RNZAF C-130 airplane last week. “These items were procured in New Zealand and would have been challenging to get here to Apia without the Defense Force’s help.”

This program is building upon the tradition of bilateral cooperation the U.S. and Samoa have enjoyed over the past several years, with similar missions in 2014 and 2015 during the UN SIDS Conference and Commonwealth Youth Games respectively.