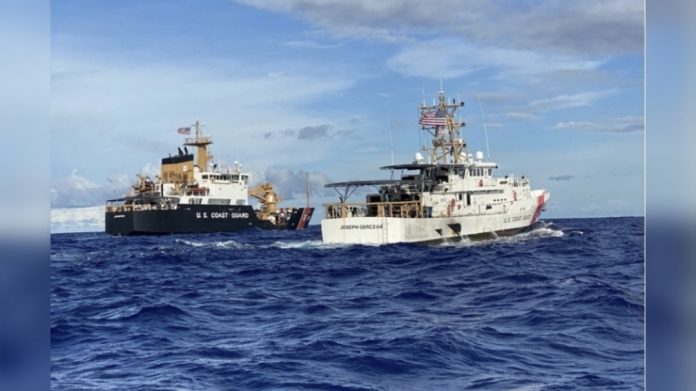 The assistance comes as Samoa awaits renovations to be made to Nafanua II, the nation’s 30 million tala Guardian Class Patrol Boat which had been tasked with the protection of Samoa’s oceans and borders from external threats such as illegal fishing and transnational crimes.

“We always look forward to assisting our partners in the region,” said Cmdr. Jeff Bryant, the 14th District’s chief of enforcement. “The United States offered to assist the government of Samoa by providing security and sovereignty operations in Samoan waters due to the absence of their patrol boat.”

As a trusted partner in the Pacific, the Coast Guard employs 11 bilateral shiprider agreements with Pacific Island Forum nations, like Samoa, to support resource security and fisheries enforcement. These agreements enabled the Coast Guard to aid host-nation sovereignty while patrolling Samoa’s EEZ.

The United States Coast Guard and the Government of Samoa have a history of partnership; in 2019, the Coast Guard cutters Walnut and Joseph Gerczak visited Apia Harbor and conducted patrol operations with officials from Samoa’s Ministry of Police and Ministry of Fisheries on board. In 2021, the crew of the CGC Oliver Berry conducted similar patrols while Samoa’s patrol boat underwent repairs.

“Operation Aiga is named that for a reason. Aiga means family in Samoan and that’s how we view our Pacific neighbours,” says U.S. Ambassador to Samoa, Ambassador Udall.

“This is real partnership. Together we can stop those who seek to steal valuable resources that simply don’t belong to them.”

With a population of approximately 40 million people covering an area of 3.3 million square miles, the Coast Guard and its international partners regularly patrol Oceania to protect and support those who call it home.