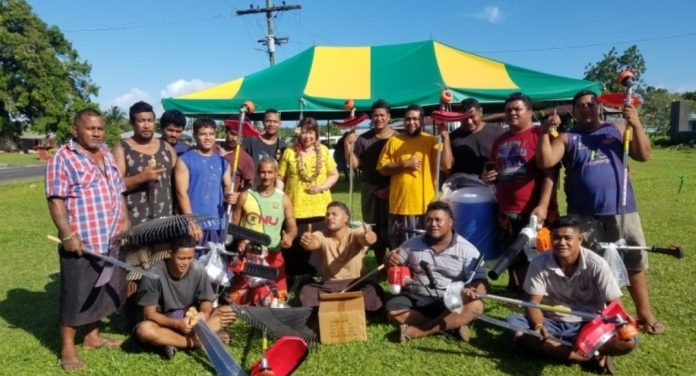 The untitled men of Vaiafai Iva in Savaii, are starting to reap the financial and social rewards of the livelihood program they are engaged in, as part of the government’s financiang assistance, channeled to the Samoa Victim Support Group, to roll out activities to eliminate violence against women and girls.

Targeting the men and young boys group’s, the economic empowerment of untitled men and unemployed youths is a preventative approach to violence, through poverty alleviation.

In August this year, the SVSG President presented to the untitled men of Vaiafai tools and equipment valued at $4,999 to enable them to carry out clean up work around their village as well as the neighbouring villages for a small fee.

Three months later, when SVSG visited Vaiafai last week, the untitle men were hard at work, cleaning and earning themselves an income from their livelihood activity.

According to the leader of the Vaiafai Aumaga, the untitled men are so excited with the Project.

The members look forward to doing clean up work, knowing that they will be paid for it.

Most importantly, the untitled men have a bank account to draw from when they serve during the village council meetings, reducing the financial distress while carrying out their Tautua or service to the village leaders.

Through the Government funding assistance, the Vaiafai Aumaga (untitled men), submitted a proposal to SVSG for a income generating cleaning project, which was approved.

The Project provided 6 weed eaters, 2 chain saws, a blower, 20 machetes, rakes and a water cooler with a total value of ST4,997.00 to the untitled men of Vaiafai

The SVSG President, Siliniu Lina Chang, commended the untitled men of Vaiafai Iva, for achieving such notable outcomes during such a short time since the tools and equipment were handed over for use.