The National University of Samoa (NUS) is being sued for breach of contract by the former Deputy Vice  Chancellor (DVC) of Corporate Services Maugaoalii Ufagalilo Fa’amanu  Mualia.

The matter was called before Justice Leiataualesa Daryl Clarke today and is adjourned to the 9th March 2020 for the NUS to file a response to the claim.
Maugaoalii did not reveal the amount of the claim but confirmed that the breach of contract is with regards to her position being dissolved.
Maugaoalii was appointed as Deputy Vice Chancellor for Corporate Services on the 27th September 2018.
Early last year allegations about the University staff tampering with student results circulated publicly, and tension within the University took a different toll when then Vice Chancellor Professor Fui Asofou So’o asked for the resignation of the Deputy Vice Chancellor of Administration, Peseta Dr. Desmond Lee Hang.
Peseta did not resign but wrote to the University Council claiming unfair treatment.
The matter reached Cabinet who engaged the Office of the Ombudsman to investigate the grievance, while placing the University’s Vice Chancellor under suspension and both Deputy VC’s on special leave.
The Ombudsman outcome report titled “Power Struggle at NUS” prompted the NUS Council in August 2019 to reinstate Peseta Dr Desmond Lee Hang, and dissolve the DVC for Corporate Services position held by Maugaoalii.
In Court yesterday morning Maugaoalii took legal action against what she believes is a breach of her employment contract with the National University. 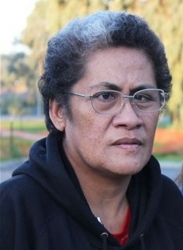