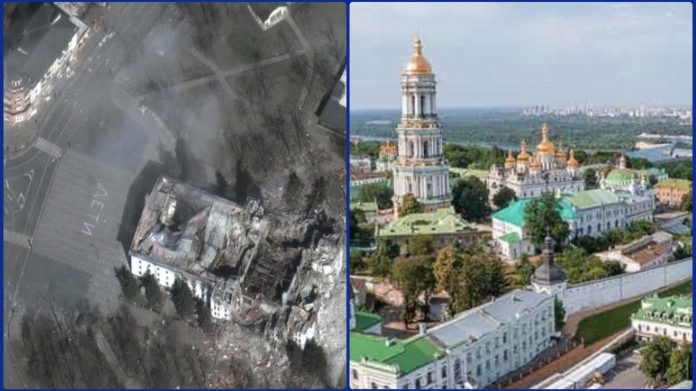 Ukraine is a country with a vast cultural heritage. It is dotted with sites of profound historic, artistic and archaeological importance – from UNESCO world heritage monuments such as the Cathedral of St Sophia in Kyiv to exquisite examples of Cossack baroque architecture. But today, this rich cultural history is now at risk.

A World Heritage site, the jewel of Kyiv 11th-century Cathedral of St Sophia dazzles visitors with its numerous golden domes and its richly coloured mosaics of saints and angels. If there’s one monument Putin would like to get his hands on, it is this cathedral, to which he wrongly traces the roots of the contemporary Russian State.

Another gem is the 12th-century Church of St Cyril, decorated with unique medieval frescoes and wall paintings by leading 19th-century symbolist artists. The church stands next to Babyn Yar, one of the largest mass graves associated with Nazi atrocities in Europe, which was recently hit by Russian missiles.

UNESCO says its is ‘very concerned’ about Russia’s war in Ukraine and that ‘humanity’s heritage is in danger’.

Dozens of cultural sites including churches, historic buildings and museums have been damaged by the war in Ukraine, the United Nations cultural agency said.

Kyiv, Ukraine’s capital city, is under heavy bombardment. The city’s Museum of Natural History houses some of the earliest examples of architecture to survive anywhere, including huts made of mammoth bones, which date back 15,000 years to the Old Stone Age (Paleolithic period).

Another well-known artwork of Ukraine’s early civilisations is the Scythian pectoral (breastplate). Found in an ancient burial mound called Tovsta Mohyla (“fat barrow”), the Scythian pectoral dates back to the 4th century BC. Made of 24 carat gold and weighing 1.15kgs, it’s decorated with intricate and delicately modelled scenes of daily life and animals.

The pectoral’s current home is the Museum of Historical Treasures of Ukraine located in Kyiv’s Monastery of the Caves. The shelling of this museum would efface the archaeological and visual record of numerous cultures unique to Ukraine. Works of Scythian art were already taken from Ukraine during the Soviet period and fill Russian museums.

UNESCO said last month it had bolstered protective measures for Ukraine’s endangered cultural heritage in light of Russia’s invasion, such as using a “Blue Shield” emblem to mark its cultural sites and monuments.

“We are very concerned about both the situation at the humanitarian and [cultural] heritage levels. Humanity’s heritage is in danger [in Ukraine],” Ernesto Ottone, UNESCO’s assistant director-general for culture, told a news conference on Friday.

The UN’s cultural agency has confirmed that at least 53 historical sites, religious buildings and museums have sustained damage during Russia’s invasion of Ukraine.

“This is the latest list, but it is not exhaustive, as our experts are continuing to verify a number of reports” filed by Ukrainian authorities, a UNESCO spokesperson told AFP as the body published a list of the 53 damaged sites.

The spokesperson said UNESCO used satellite images and witness reports from the scene to verify the information provided by the Ukrainian authorities.

The sites UNESCO said have been damaged include more than a dozen in the eastern Kharkiv region that has been intensely hit by Russian fire, ranging from churches to more modern heritage sites.

Five are in the capital Kyiv while another five are in the Chernihiv region of northern Ukraine which is home to a cluster of historic sites.

“Any violation of these norms will see the perpetrators brought to international responsibility,” she said, adding that UNESCO would be watching closely the state of cultural heritage in Ukraine.

Having initially said Moscow had not responded, UNESCO later said it had received an answer, in which Russia said it was aware of its obligations and was “committed” to them.

At talks this week, Moscow, which calls its actions in Ukraine a “special military operation” to demilitarise the country, said it would reduce offensives near Kyiv, the capital, and the nearby city of Chernihiv to build trust.

Kyiv and its allies say Russia is pulling troops out of those areas, not as a goodwill gesture but to regroup, because they have taken heavy losses.