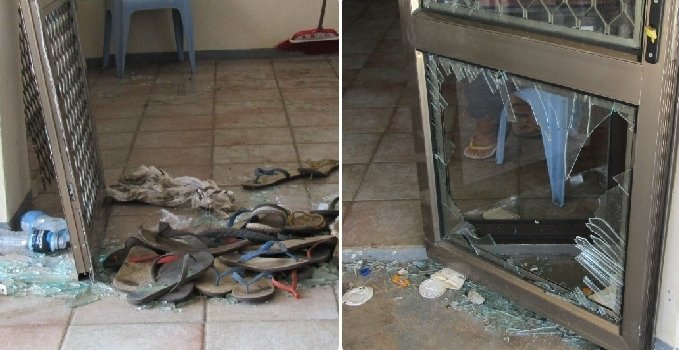 Monday 21 June 2021, Apia Samoa. Police could not control a hooligan crowd who broke down glass doors and climbed through louvered windows of the EFKS Hall at Mulinuu, desperate to be registered for work opportunities under seasonal employment schemes.

Registrations were to be for those between the ages of 21 – 40, required to bring along documentation such as proof of a clean police record, copies of identification, and support letters from village mayors or religious ministers. Registrants were also asked to bring along a pen so they could complete their own registration form, and avoid situations where others completed forms for applicants.

The process would have run smoothly had it not been for the impatience of an ill-mannered crowd who gathered outside the hall after the first six hundred or so people were let into the hall for registration.

Speaking to Samoa Global News, the woman in charge of Samoa’s seasonal employment scheme, Lemalu Nele Leilua, said the behavior of those asked to line up outside the hall after the first six hundred people had been allowed in, ultimately led to the decision to cancel today’s registration process and disburse the uncontrollable crowd.

“This is exactly the kind of behaviour we need to filter out when selecting participants to travel overseas for seasonal work”.

Lemalu Nele said her team had set up two registration sites, one at each corner of the hall, and then let in the first 600 people to be registered.

“We anticipated the crowd, and we had a process in place with 6 computers at each side, and chairs to seat one thousand people to come into the hall at a time;

“They would come in and be given a form, and then asked to complete their own form because in the past, many applicants get other people to do that for them. We even had photocopiers in anticipation of those who bring originals and don’t have access to copiers,” said Lemalu.

“The process was running smoothly and everything was peaceful inside the hall,” said Lemalu, “until we heard the commotion from outside”.

Lemalu said she had gone outside to try and calm down the crowd, and explain that more people would be let into the hall as registrations were completed.

“The behaviour was unacceptable. They used vulgar language and called out abusive words towards our staff, demanding to be let into the hall. The three police officers there at the time could not control them,” said Lemalu.

Both main entrance doors of the EFKS hall were broken down by the crowd, who had also removed the louvers and climbed through the windows of the hall. Lemalu said they eventually let the crowd inside, and once they had filled every corner of the hall, sitting around the stage, and up on the second level, she announced the decision to stop the registration process, until further notice.

The decision to disburse the crowd was supported by a Senior Police officer inside the hall, who had called for backup.

the Commissioner of FESA confirmed his team had responded to a call from MCIL. They treated the injured, taking casualties to Motootua National Hospital for treatment.

Commissioner Tanuvasa Petone Mauga told Samoa Global News two of the nine people transferred to the hospital were critically injured. “When our first responding crew arrived they saw the situation was not good, so they called for backup, more manpower and ambulances. Triage was also erected to cater for trauma cases.. and Police and Red Cross were informed and called in to assist FESA’s EMR (emergency medical response) team”.

Several witnesses expressed their disappointment that they could not register but agreed that the situation was not safe.

Taylor Otto, who says he was waiting outside the hall since 4am said he saw the FESA team taking away people who had suffocated and sustained injuries from broken glass.

“It was terrible and this is the second time I’ve seen such a scene. It was just like that last day of registration for voters this year, where the crowd also tried to push their way through these same doors,” said Otto.

“A lot of people were pushed by others towards those outside walls of the building, and they were squashed up to doors in the front of the hall, and that’s why some of them broke the glass on the doors, because they were stuck and couldn’t breathe,” he said.

Christy Sio told SGN she could hear people screaming and swearing to the Police and Officials inside, yelling at them to open the doors.

“People were standing in the sun and I saw people collapsing in the crowd, because they couldn’t breathe, the crowd of people were pushing and shoving each other, it was crazy,” she said.

Ms Sio said it was the first time she had experienced anything like it, and she never wanted to see it again.

Samasone Samasone, 23, from Sataoa said he was also at the hall since 4am and there were already hundreds of people there when he arrived. He said people were fighting to get to the front of the line and didn’t care or show any respect for those around them.

“The police officers were trying their best to stop people from breaking in through the glass doors and jumping through the windows but they couldn’t. The people were very disrespectful,” said the 23 year old.

“It was the saddest moment for me when they announced that registration was cancelled, but I understand because of what I saw, it was not safe,” he adds.

MCIL’s Seasonal Employment Unit facilitates and coordinates overseas labour and employment opportunities for thousands of Samoan people each year. The Ministry works collaboratively with New Zealand’s Ministry of Business, Innovation and Employment and also the Labour Mobility Assistance Program of Australia to recruit labourers and workers from Samoa for the viticulture and horticultural sectors of New Zealand and Australia.