United Nations staff in Samoa joined in the global celebrations of the organisation’s 75th anniversary on Friday in a staff event held at Taumeasina Island Resort.

Formed at the end of the Second World War on October 24th 1945, the UN has grown to become the world’s single largest humanitarian organization with 193 member states. The UN’s main mandate is to maintain international peace and security, developing friendly relations among nations and promoting social progress, better living standards and human rights.

The UN Day this year holds even more significance as the organization’s 75th anniversary is marked during a time when the world is still in the throes of the COVID-19 pandemic which has radically transformed our economies and societies.

The ongoing health crisis wasn’t lost on Friday night’s event, all speakers somberly acknowledging that, whilst the organization has a lot to celebrate in terms of its achievements over the past years, there still remains a lot to be done.

“What we must be reminded today is the great privilege we share as UN staff, volunteers, consultants and contractors to be serving on the barricades of multilateralism at the time people and the planet need us the most. We must live up to the highest aspiration of the farthest left behind and honour the vision of the founding members of the United Nations 75 years ago,” said Simona Marinescu, UN Resident Coordinator in Samoa.

To mark its 75th anniversary, the United Nations led a worldwide people’s debate: UN75, the World We Want, the United Nations We Need. Launched by UN Secretary-General, António Guterres, it is the largest and furthest-reaching global conversation ever on building the future.

Through UN75, the United Nations encourages people to come together to define how enhanced international cooperation can help realize a better world by 2045, the UN’s 100th birthday.

Events also focused around the start this year of the Decade of Action and the need to accelerate delivery for the Sustainable Development Goals, with the urgent push for all countries to achieve these goals in the next 10 years.

Secretary General, Antonio Guterres said the ideals of the UN — peace, justice, equality and dignity — are beacons to a better world, especially now as the UN is marking its 75th anniversary at a time of great challenge, including the worst global health crisis in its history.

“Everything we do during and after this crisis must be with a strong focus on building more equal, inclusive and sustainable economies and societies that are more resilient in the face of pandemics, climate change and the many other global challenges we face,” said Mr. Guterres. 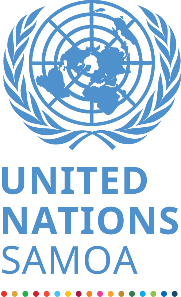 There are 15 United Nations organizations based in Apia that form the UN Country Team serving the Cook Islands, Niue, Samoa and Tokelau: FAO, ILO, UNDP together with UNCDF, UN Volunteers, the Global Fund and the Small Grants Programme, UNEP, UNESCO, UNICEF, UNFPA, UN Women, WHO, WMO, and OCHA.

The UN Country Team in Samoa works collaboratively on joint development programmes to serve the people of Cook Islands, Niue, Samoa, and Tokelau.

In Prime Minister Tuilaepa Sailele Malielegaoi’s words: “The United Nations can only be more effective in defending peace, security and shared prosperity if we, the Member States, remain strong in our resolve to uphold human rights, live life within the planet boundaries and leave for our future generations a better world than the one we took over.”