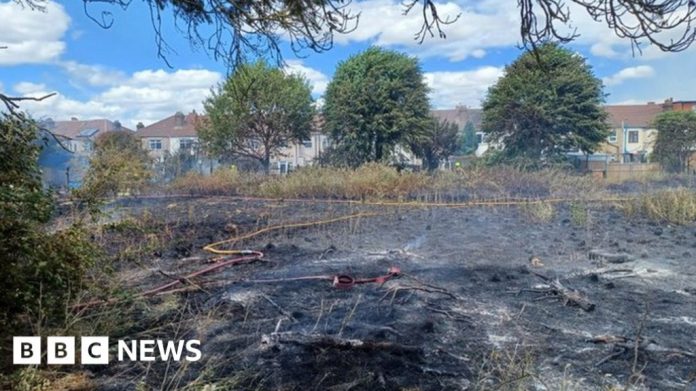 LONDON — Britain made meteorological history on Tuesday when temperatures in some places topped 40 degrees Celsius (104 degrees Fahrenheit) for the first time ever recorded in the United Kingdom, as a second straight day of record-setting heat gripped parts of Europe.

Fires raged in France, Spain and even areas of London, as the hot, dry conditions strained emergency services and brought misery to areas unaccustomed to such sweltering summers. By evening in Britain, however, thunderstorms were beginning to offer a respite, and milder temperatures were forecast for Wednesday.

But it was a day of scorching milestones in Britain, where in the morning the thermometer in Surrey recorded a provisional reading of 39.1 degrees Celsius (102.4 degrees Fahrenheit), the highest level ever recorded in the United Kingdom.

That record was broken about two hours later, when the Met Office, Britain’s national weather service, said the provisional temperature at Heathrow Airport hit 40.2 Celsius (104.4 Fahrenheit). If confirmed, it would be the first time that the temperature in Britain had exceeded 40 degrees Celsius.

By the afternoon, that marker was surpassed when Coningsby in eastern England recorded a temperature of 40.3. At least 34 sites exceeded the country’s previous record of 38.7 degrees, the Met Office said.

In France and Spain, firefighters have been battling wildfires that have gobbled up forest and brush and in some places, forced evacuations. On Tuesday, more than 2,000 firefighters were facing off against a blaze in the southwest that has forced 37,000 people from their homes this week.

In Britain, the government urged people to continue to work from home — a call that many heeded Tuesday — but for schools to stay open — a plea that some districts had ignored on Monday, sending students home.

Network Rail, which operates the country’s rail system, issued a “do not travel” warning for trains that run through areas covered by a “red” warning issued by the Met Office. That covers a large section of the country, stretching from London north to Manchester and York. Several train companies said they planned to cancel all service running north from the capital.

Trains are particularly affected by high heat because the infrastructure — rails and overhead wires — is not built to cope with extremely hot temperatures. Those that are still running are subject to speed restrictions. The London Underground, most of which does not have air conditioning, has also suspended some of its service.

Amid all the sweltering, there was a promise of relief: Temperatures were forecast to plunge to the high 20s Celsius (low 80s Fahrenheit) by Wednesday.

According to BBC reports there were no deaths but more than 40 houses and shops were destroyed after a number of grass fires spread to nearby buildings.

Two of the largest wildfires broke out in Upminster and the village of Wennington, both in east London, where black smoke billowed into the air and flames destroyed buildings and left nearby fields charred.

A firefighter in Wennington described the conditions as “absolute hell”.

The hidden dangers of summertime swims.

Many villagers were left stranded when the fires, first seen in gardens, tore through rows of houses.

Mr Stock said: “Down the actual main road, all the windows had exploded out, all the roofs had caved.

“It’s heartbreaking, really. I mean, I’ve been there 41 years but my grandad was there before me, so we’ve been there 60-odd years,” he told the BBC. “And to see it all fall apart yesterday, it’s really sad.”