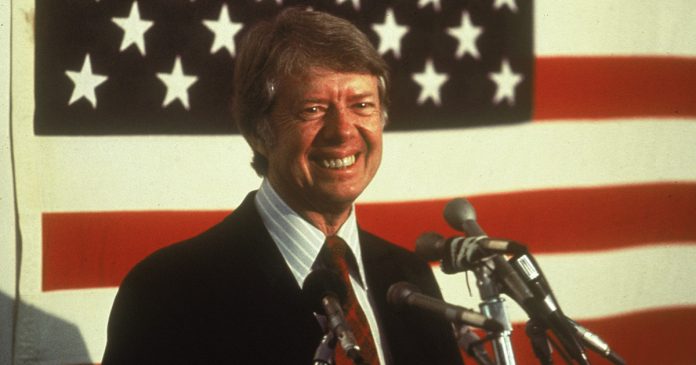 On this day in 1980, in a strong reaction to the December 1979 Soviet invasion of Afghanistan, President Jimmy Carter asks the Senate to postpone action on the SALT II nuclear weapons treaty and recalls the U.S. ambassador to Moscow. These actions sent a message that the age of detente and the friendlier diplomatic and economic relations that were established between the United States and Soviet Union during President Richard Nixon’s administration (1969-74) had ended.

Carter feared that the Soviet invasion of Afghanistan, in which an estimated 30,000 combat troops entered that nation and established a puppet government, would threaten the stability of strategic neighboring countries such as Iran and Pakistan and could lead to the USSR gaining control over much of the world’s oil supplies. The Soviet actions were labeled “a serious threat to peace” by the White House. Carter asked the Senate to shelve ratification talks on SALT II, the nuclear arms treaty that he and Soviet Premier Leonid Brezhnev had already signed, and the president called U.S. ambassador to Moscow Thomas J. Watson back to Washington for “consultation,” in an effort to let the Kremlin know that military intervention in Afghanistan was unacceptable.

When the Soviets refused to withdraw from Afghanistan, America halted certain key exports to the USSR, including grain and high technology, and boycotted the 1980 summer Olympics, which were held in Moscow. The United States also began to covertly subsidize anti-Soviet fighters in Afghanistan. During Ronald Reagan’s presidency in the 1980s, the CIA secretly sent billions of dollars to Afghanistan to arm and train the mujahedeen rebel forces that were battling the Soviets. This tactic was successful in helping to drive out the Soviets, but it also gave rise to the oppressive Taliban regime and Osama bin Laden’s al-Qaida terrorist organization.

In 1980, Jimmy Carter lost the presidency to Ronald Reagan, who favored a more aggressive anti-Communist foreign policy. Reagan dubbed the USSR the “evil empire” and believed it was America’s responsibility to save the world from Soviet repression. He dramatically increased U.S. defense spending and ramped up the nuclear arms race with the Soviets, whose faltering economy ultimately prevented them from keeping pace. The Soviet Union collapsed in 1991.