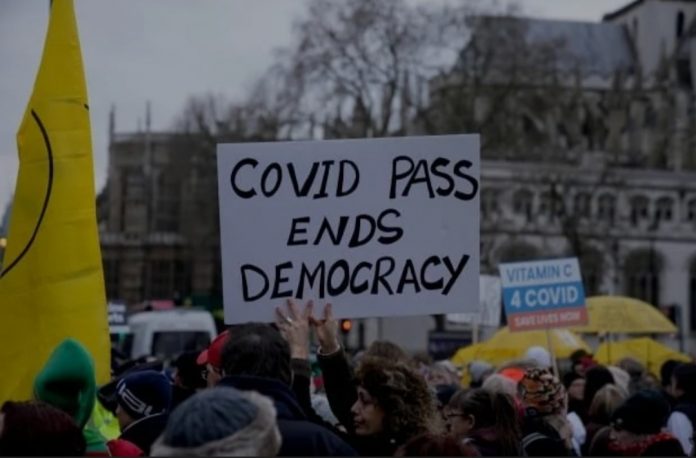 British lawmakers voted Tuesday to approve new restrictions to curb the spread of the omicron variant, but Prime Minister Boris Johnson faced a major revolt by MPs in his own Conservative party who are opposed to the regulations.

The result was a blow to the authority of the embattled prime minister, whose approval ratings — both with voters and inside the Conservative Party — have plunged amid ethics scandals and allegations that his government breached its own pandemic restrictions.

The House of Commons voted on measures that take effect this week, ordering masks to be worn in most indoor settings in England, changing rules on self-isolation and — most contentiously — requiring proof of vaccination or a negative coronavirus test to enter nightclubs and large crowded events.

All passed comfortably because of opposition party support, but 96 Conservatives voted against the nightclub rules — by far the biggest rebellion of Johnson’s premiership. It came despite Johnson imploring Tory legislators to back the measures in a private meeting just before the vote.

As if to underscore omicron’s rapid spread, a handful of lawmakers missed the vote because they have COVID-19 and are in quarantine.

Vaccine passes have become commonplace in many European countries, but Johnson’s government has resisted introducing them in England, although the governments of Scotland, Wales and Northern Ireland, which set their own health rules, have done so.

The British government argues that the highly transmissible omicron strain has changed the argument, and proof of vaccination or negative tests is now a sensible measure, along with booster vaccinations for all adults.

“Omicron is a grave threat,” Health Secretary Sajid Javid told members of Parliament, saying the strain was already estimated to be infecting 200,000 people a day in the U.K. “Scientists have never seen a COVID-19 variant that is capable of spreading so rapidly.”

He said the nightclub rule was “not a vaccine passport” because people could also use a negative virus test to enter venues.

Many Conservative legislators, however, argued that the new requirements were economically damaging and restricted individual freedoms.

Meanwhile, Johnson called for thousands of volunteers to staff new vaccination centres in shopping areas, stadiums and racecourses as the government accelerates its booster program to combat the omicron variant of the coronavirus.

The drive comes two days after Johnson set a target of giving booster shots to all adults by the end of this year to stem the tide of omicron, the latest variant of concern.

“We need tens of thousands of people to help out — everyone from trained vaccinators to stewards,” Johnson said in a statement. “Many thousands have already given their time — but we need you to come forward again, to work alongside our brilliant GPs, doctors, nurses and pharmacists, to deliver jabs and save lives.”

Long queues formed at vaccine centres in England on Tuesday as hundreds of thousands of people rushed to get COVID-19 booster shots.

Meanwhile, Javid told Parliament that Britain will remove all 11 countries from its COVID-19 travel red list from Wednesday.

“Now that there is community transmission of omicron in the U.K. and omicron has spread so widely across the world, the travel red list is now less effective in slowing the incursion of omicron from abroad,” he said. “Whilst we will maintain our temporary testing measures for international travel, we will be removing all 11 countries from the travel red list effective from 4 a.m. tomorrow morning.”

Health officials with the World Health Organization — which had previously called for a moratorium on boosters as it worked to increase equitable access to the vaccine worldwide — on Tuesday noted that it’s still critical to get doses to people who have not yet had access to initial shots.

WHO Director General Tedros Adhanom Ghebreyesus said vaccine booster shots can play a role in curbing the spread of COVID-19 as long as people most in need of protection also get access to jabs.

The update came as Tedros and colleagues urged people not to underestimate the virus even as scientists work to pin down more detail on the omicron variant.

“Surely, we have learned by now that we underestimate this virus at our peril. Even if omicron does cause less severe  disease, the sheer number of cases could once again overwhelm unprepared health systems,” he said, noting in his briefing that omicron was “spreading at a rate we have not seen with any previous variant.”

Tedros said 77 countries had reported cases of the omicron variant — and noted that it was likely that it had spread to other countries that had not yet detected it.

By The Associated Press, CBC News