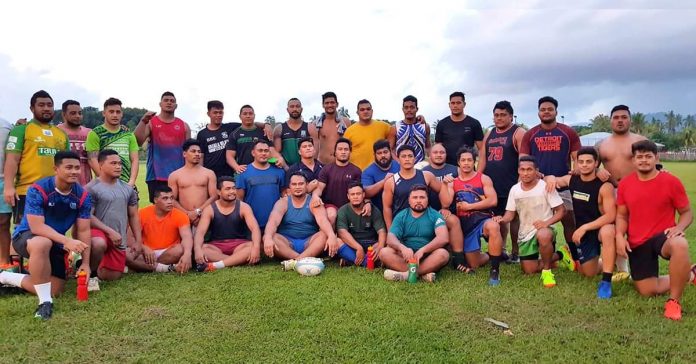 13 June 2019, Apia Samoa. The PPS (Petroleum Products Supplies) Super 9 semi-finals are being held this Saturday and the Taula Eels from the Vaimauga district are staying focused as they prepare for the battle against the Lefaga-Safata Navigators.

The Apia Union franchise are the reigning champions of the PPS Super 9 tournament with back to back wins since the national competition launched in 2017.

In the first two years of the Super 9, the Taula Eels were undefeated, with 20 consecutive wins. They also won 7 out 8 matches of their 2019 season, succumbing only to the Savaii Vikings in the second round of the season.

During the last training run yesterday afternoon, Head Coach Sooalo Fono Pitoitua says that his team are taking a humble approach to their preparations, making sure the players remain focused on the task ahead.

“The boys are in good spirits, and we want to stay focused on the semi-final match against the Navigators,” said Sooalo.

“We’ve been training well in the past week, the boys have been working hard and now it’s time to trust them that they will execute on the day.”

The Eels have the most depth of players out of all franchises of the PPS Super 9, selecting from 10 well established clubs of the Taula Apia Union. Coaches can select from amongst players of Moataa, Vaiala, SCOPA, Apia, Vailele, Maagiagi and Leifiifi from the Vaimauga district, as well as Moamoa, Alamagoto and Vaimoso who have broken away from Apia West in recent years.

For the last two years, the Taula Eels have faced the Aana Chiefs in the finals. This year, the Aana Chiefs have finished the season in 3rd place and will face the might of 2nd placed Savaii Vikings in the other semi-final.

The Eels Management team say that 4th-placed Navigators from Lefaga and Safata are a team to not be underestimated.

“The Navigators have one of the best forward packs in the competition;

“Most of them played in our Apia Union tournament season leading up to the Super 9, so they are familiar with our style of play,” said Taula Eels Manager Tauiliili Polito Vili.

During the last round of the competition, the Tuala Eels had a bye, so they used the Saturday to visit Mapuifagalele, taking gifts and spending time with the elderley.

“We visit the elderly at Mapuifagalele every year. It is a good humbling experience for the players to go and spend time with the elderly, to put a smile on their faces and give back to our community,” said Tauiliili.

The reigning Super 9 champions have named their team for tomorrow’s semi-final and Patrick Faapale has returned from injury to captain the side.