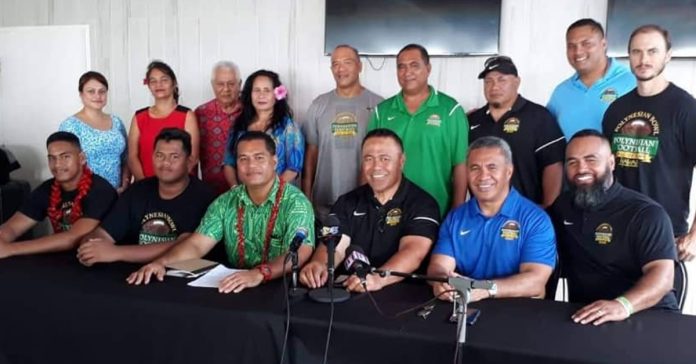 The Polynesian Bowl is held annually during the Polynesian Football Hall of Fame Enshrinement Week and it is where the world’s top high school football players gather to celebrate culture and play the game they love.

RJ Aiafi of Samoa College and Belford Filifilia Viali of St Josephs College have been selected to participate and represent Samoa, as announced in a press conference held at Taumeasina Island Resort earlier today.

The door has been opened for the youngsters by 4-time Superbowl Champion, Seiuli Jesse Sapolu who is in Samoa with two officials from the Polynesian Football Hall of Fame and former NFL players Maa Tanuvasa, Va’i Sikahema and Reno Mahe.

Seiuli and his group visited Samoa to promote American Football and finalise the selection of two students to represent Samoa to the Polynesian Bowl.

Speaking to Samoa Global News RJ Aiafi said he feels very honoured to be selected to represent Samoa in Hawaii next year.

“I’m very excited and I know it will be a different environment, but it’s a great opportunity to learn more about the sport,” he said.

His mother Sharon Potoi-Aiafi thanked Seiuli and his team for providing this opportunity for Samoan students.

“It’s a great opportunity for our young people and to have these young boys selected to represent Samoa in Hawaii – is an opportunity of a lifetime.”

Belford said he was thankful to the sons of Samoa for giving back to the community through this program, which he says will open doors for a career option and allow him to learn more about the sport.

His mother Frances acknowledged the support from Seiuli Jesse Sapolu and the team, in selecting her son to play in the all-star football match in Hawaii next year.

She said it’s a lifetime opportunity and she hopes there will be more of this in the future for other students to experience and learn more about American Football.