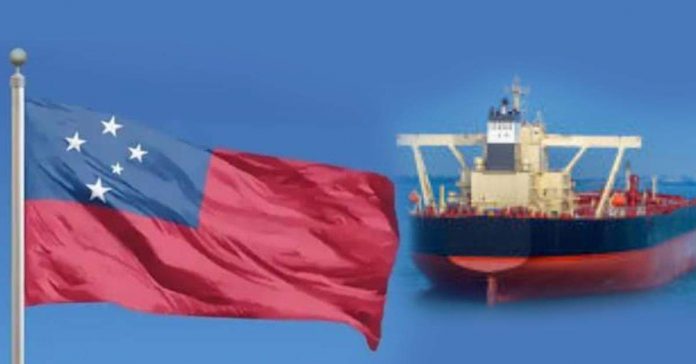 The Iranian cargo carrier Hayan left from the Iranian port of Bandar Abbas on June 3 and set sail for Karachi on Pakistan’s coast, according to ship tracking data from maritime risk analysts Windward.

On June 7, it changed its name to Mehri II and its flag to that of Samoa, the data showed, as it made its way toward Karachi port.

The ship then returned home, changing its flag back to Iran and its name back to Hayan.

Samoa denies allowing Iran to register any ships under its flag.

“The said vessels Hayan or Ya Haydar are not, and have never been listed, nor registered on the Samoa’s registry of vessels,” said Anastacia Amoa-Stowers of the Maritime department at Samoa’s Ministry of Works, Transport & Infrastructure.

Amoa-Stowers said Samoa was a closed registry, meaning that any foreign vessel flying its flag was doing so illegally.

The second senior Iranian government official involved in shipping declined to comment when asked about the two vessels.

A spokeswoman with the International Maritime Organization said the UN’s shipping agency had received information from Samoa which has been circulated to member states.

Imran Ul Haq, spokesman for the Pakistan Maritime Security Agency, said they had no information, when asked about the Iranian ship’s activity.

Shipping data also show that a separate Iranian-owned cargo ship, the Ya Haydar, has been sailing around the Gulf and reporting its flag as that of Samoa.

It is not uncommon for vessels to register under a “flag nation” meaning they will fly the flag of another State while moving cargo, for convenience of insurance and to avoid customs random checks

Panama for example is the Worlds leading flag state with hundreds of vessels on its registry.  Reuters reports that they and some other key flag states are looking more closely at the thousands of ships on their registers to ensure they comply with U.S. sanctions that were re-imposed against Iran last year and tightened further since.

Panama reports to have removed 59 tankers linked to Iran and Syria earlier this year, a decision welcomed by the United States which wants to cut off Tehran’s vital oil exports.

The de-registered tankers represents the majority of Iran’s operational fleet of tankers, the lifeblood of the oil-dominated economy, although Iran may have re-registered some ships under new flag states.

“There are so many shipping companies that we can use. In spite of U.S. pressure, many friendly countries are happy to help us and have offered to help us regarding this issue,” said an Iranian shipping official, when asked about tankers being de-listed.

Some nations have expressed caution, however. The world’s third biggest shipping registry, Liberia, said its database automatically identified vessels with Iranian ownership or other connections to the country.

“Thus, any potential request to register a vessel with Iranian connection triggers an alert and gets carefully vetted by the Registry’s compliance and management personnel,” the registry said.