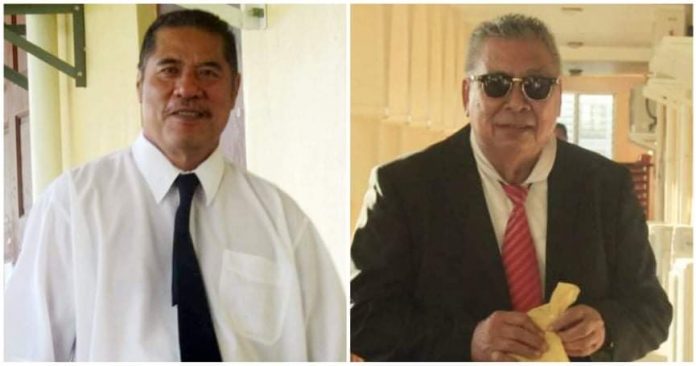 Maualaivao alleges bribery against Seiuli Ueligitone who polled 152 votes more than him during the 9th April general elections.

Through his lawyer Tuatagaloa Shane Wulf of Wulf Law, Seiuli Ueligitone has also filed a counter-petition against Maualaivao who is represented by former prosecutor Magele Leone Sua-Mailo.

Maualaivao’s case against Seiuli has a total of 16 witnesses, 13 of them including Maualaivao where called to the stand on Tuesday, the second day of trial. The last 3 are expected to be called Wednesday morning before Justice Vui Clarence Nelson and Justice Fepuleai Ameperosa Roma presiding.

One of the witnesses was a 67 year old village matai of Malie.  Aumatagi Saoloto Ilalio Crawley, who is also a relative of Maualaivao Pat Ah Him, told the Court Seiuli had given $10,000 tala to the village when they held their first meeting of 2020 on the 27th of January, over a year before general elections.

According to Aumatagi, Seiuli had told the village he was keen to run in the 2021 general election, and then gave money to help out with morning tea.

The witness said in his affidavit it was the first time the village of Malie had received such an amount of money for morning tea. He said the usual practice is for the taulelea (non titled men) to pitch in $3 tālā, and $5 tālā for matai to go towards morning tea for village meetings.

During cross examination Tuatagaloa Shane Wulf asked the witness if all who were present at the meeting agreed to have Seiuli represent them in the upcoming elections and Auimatagi Saoloto answered, No.

A relative of Maualaivao, Auimatagi told the Court the village representative or sui o le nuu of Malie, Faamausili Siona did speak on that day, to wish Seiuli well.

“The village representative did bless him and wished him well for his continuation as an MP;

“He told Seiuli, If there’s anything there in your pocket, then bring it for our morning tea,”

When taking the stand Maualaivao and his brother Muagututagata Peter Ah Him said they did not attend that first meeting of the year as they had other commitments and matters to attend to on that particular day. They were both available and attended the village meeting in September 2020.

All of Maualaivao’s witnesses testified that the petitioner did not engage in bribing voters.

Muagututagata Peter Ah Him, also a former Member of Parliament for HRPP confirmed that his brother had only told the village in a meeting on the 12th of October 2020 that he intended to contest in the April 2021 elections.

According to Muagututagata, another matai of the village, Deputy Ombudsman Maualaivao Pepe, had stopped the meeting after verbally abusing his brother for wanting to contest the seat.

When the petitioner took the stand, he said he believes the reason why the meeting was postponed was because of the abuse towards him (sauaina ia e le nu’u).  He also said the Pulenu’u of Malie had told him it was a great idea for him to run however, he needed to inform the village about his decision.

When Wulf asked Maualaivao to confirm if he had given $50 tālā to a witness named Felise Faleniu Leafa in February 2021 and Paulo Leapai in March 2021 at his office at Nia Mall;  Maualaivao denied the accusations.

Maualaivao’s lawyer Magele Leone Sua-Mailo asked to have the petition case run as a separate trial from the counter petition.

Justice Vui and Justice Fepuleai agreed and Seiuli’s counter petition will be kept and heard as a separate matter before the Court.

Proceedings continue this morning, Wednesday 8th June 2021 to hear the last 3 witnesses from the petitioner’s side before moving on to Seiuli’s counter petition.