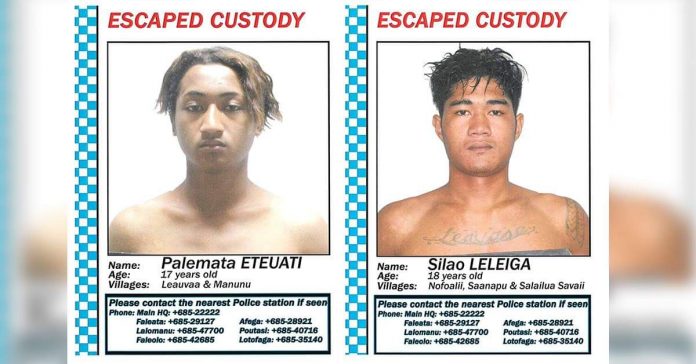 A statement from the Samoa Police issued an hour ago confirms that two more prisoners have escaped from Tafaigata Prison.

The statement reads, “This morning the Samoa Police Service were notified by the Samoa Prisons and Correctional Services of two custodies who have escaped from Tafaigata prison”.

The escapees are Palemata Eteuati, just 17 of Leauvaa and Manunu and 18 year old Silao Leleiga of Nofoalii, Saanapu and Salailua, Savaii. Both men are in custody awaiting trials for charges of burglary and theft.

This latest incident comes three months after notorious criminal Pati Sonny Chong Nee escaped Tafaigata with Aniseko Vailei on the 20th of January. Vailei was caught by police and returned to prison after the pair broke into the One & One Shop at Vailoa armed with machetes and stole $60,000 tala. Chong Nee is still at large.

The Samoa Police are asking for the public’s usual help and cooperation for information.

“We ask members of the public to contact the police on phone number 22222 or visit any police station near you to report any sightings or if you have any information of their whereabouts.”