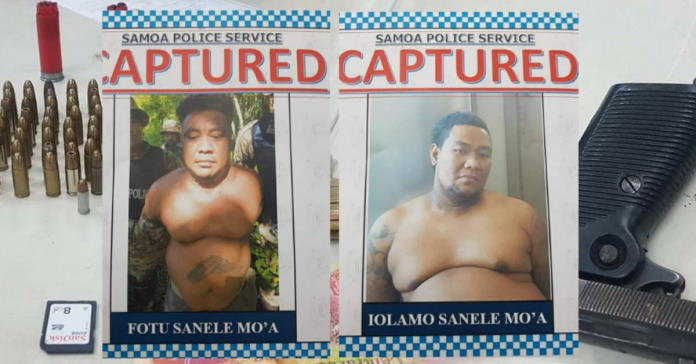 The Samoa Police Service have captured two men who had been threatening villagers and firing gun shots within the village of Faleatiu over the past three weeks.

One of the men has been on the “Wanted” list of the Tactical Operations Section (TOS) since they were reported to have fired shots to threaten police officers who had gone out to Faleatiu to pursue a burglary investigation.

“These are the same guys who shot rounds in close proximity to unarmed, uniformed investigating officers to halt their investigation where both were suspects of a robbery, where the victim was pistol wipped and money and personal properties were forcefully taken”, said Police Commissioner Su’a Fuiavailiili Egon.

Fotu Sanele Mo’a was one of 11 arrests during the historical $10 million tala worth of drug bust of November 2019. During the bail hearing his mother and Tagaloasa Filipaina’s sister pleaded with the Courts for Fotu Sanele’s release which was subsequently granted.

Police say both men will be charged for Causing Serious Bodily Injury with Intent with additional criminal charges expected to be filed.

Still at large is Sosene Asomaliu who was also present and said to have been the one that fired gun shots to scare off uniformed police.

The Samoa Police Service say their work was assisted by the village youth of Faleatiu.

“SPS wishes to acknowledge members of the public but especially the village council and aumaga of Faleatiu for assisting police in the apprehension of these individuals”.

Last night a source from Faleatiu told Samoa Global News that these same men had been firing shots around the village, upset that the Village Council had decided to block the auala galue road that leads into the mountainous forests widely known as where marijuana plants are cultivated.