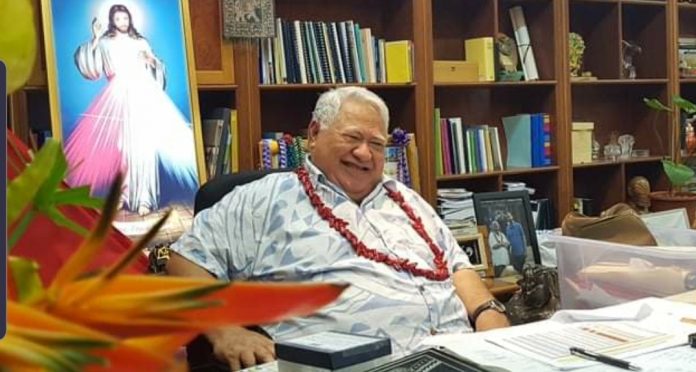 Prime Minister Tuilaepa Dr Sailele Malielegaoi has set aside any doubts about the HRPP’s continued popularity in the lead-up to the April 2021 general elections, with the announcement that he would be leading a campaign of over 100 candidates.

Calling the Samoa media back into his office after a long break from face-to-face press conferences due to COVID-19 restrictions, the Prime Minister confirmed that HRPP currently has 94 candidates, with more expected to be registered in the coming months.

“More members are expected and it will get to over 100 because there are several members who have yet to formally meet with their villages”.

“There will be more than 100 candidates, for the 49 seats”, said Samoa’s 6th Prime Minister who has led the country since 1998.

Tuilaepa went on to say that a caucus meeting of 43 members have endorsed his position as the party’s leader.

“That is the HRPP process we have always followed; we endorse the leadership to take us through the campaign period;

“Today only two members were missing – one who is unwell and another who is in Savaii”, said Tuilaepa.

HRPP has governed the country since first winning power in 1982, except for a brief period in 1986 and 1987 when internal differences forced it into coalition.

The two founders of the early party, Vaai Kolone and Tofilau Eti Alesana, both became Prime Ministers of Samoa.

In the 2016 General Elections the HRPP secured another landslide victory winning 35 of the 49 elected seats in the Legislative Assembly, while 12 independents subsequently joined them. Of the 47, only two members – Laaulialemalietoa Leuatea Schmidt and Faumuina Wayne Fong have recently left to become Independent.